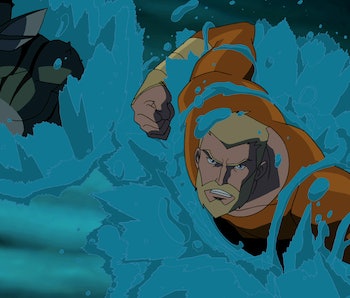 Aquaman is unquestionably a dumb character, right? He talks to fish, which is goofy enough, but he’s also king of a made-up fantasyland. His problems, most people assume, are more similar to those depicted in Marvel’s Thor films than the relatable, street-level issues faced by Batman and Flash. As an old, white man who lives under the sea, he’s probably the least hotly anticipated superhero making his movie debut in the next couple years. Even Geoff Johns admitted on Twitter this week that Aquaman is a hard sell for DC.

I have never, ever been on the Aquaman train (boat?), but it took watching Young Justice to change my mind. In Young Justice, Aqualad (who suffers from an even more unfortunate name than Aquaman) explores dangerous Atlantean politics, and double-crosses Black Manta, his biological father. He also plays a part in the conflict between Aquaman (Orin) and Ocean Master, Aquaman’s half-brother Orm. Aquaman will follow a slightly different story, namely one written by Geoff Johns in which Arthur Curry (Jason Momoa) discovers that’s he’s only half human and is the heir to Atlantis. Still, both stories share a humanity that’s surprising given that they’re about fish-people.

Aquaman, whether he’s Orin or Arthur, makes mistakes like most other superheroes, and is marked at times by the same headstrong, stubborn personality traits as Thor. In Young Justice, Orin overestimates his own abilities and allows his loved ones, including his pregnant wife Mera, to end up in dangerous situations because he doesn’t think things through. His hubris and refusal to bend to some surface customs make him an interesting hero. The whole talking to dolphins thing? Not so much.

Though we don’t know much about Wan’s Aquaman film yet, the casting news confirms that a few of the key Young Justice characters will play roles in the story. If Aquaman is anything like Aqualad’s plotlines in Young Justice, DC could produce a film more ambitious, and more successful, than Marvel’s Thor films, which are currently the most important quasi-magical, otherworldly superhero films to beat.

Aquaman won’t be a story about ocean people splashing around so much as a political intrigue story about brothers fucking each other over for power. And, of course, one of those brothers will be played by Jason Momoa, who was clearly cast to make Aquaman more of a threatening, serious presence than his name would suggest. Aquaman’s conniving half-brother, Orm, will be played by Patrick Wilson, whom director Wan worked with in The Conjuring and Insidious. Though we know Willem Dafoe will play Nuidis Vulko, reports have also confirmed that Black Manta will play a role in the film, though an actor has not yet been officially cast. Actors including Denzel Washington, Michael K. Williams (The Wire), and Michael Jai White (Spawn) have been rumored to be in talks for the role.

All of those actors, plus the news that Aquaman will use the same stunt team from Mad Max: Fury Road and follow the tone of Wan’s filmography — including Saw, Insidious, The Conjuring — suggest a dark and thrilling film that doesn’t mess around with the goofiness of Aquaman’s early comics.

If DC is going to make Aquaman into a mainstream character who can float an entire blockbuster film, they’ll have to convince the masses that a story set in Atlantis can feel as engrossing and realistic as successful high fantasy epics have in recent years. Can DC’s Atlantis be a Westeros or a Middle-earth, or at least, an Asgard? The only way DC will pull off that comparison is by making its film as human as possible and avoiding the creation of a CGI spectacle, which the company hasn’t been able to do yet.

Of course, strange characters and set pieces do crowd Aquaman’s story. Not only do Atlanteans live under the sea, but a lot of them have gills and use sorcery. Aquaman is a humanoid Atlantean, but there are also a lot of squid-esque Atlanteans swimming around him, and a shark dude who’s actually named Sha’ark. If the Aquaman movie leans harder into the character’s ascent to the throne, and how he battles both his own brother and a rotating cast of terrorists to maintain control, viewers will find themselves able to move past the strangest parts of the story.