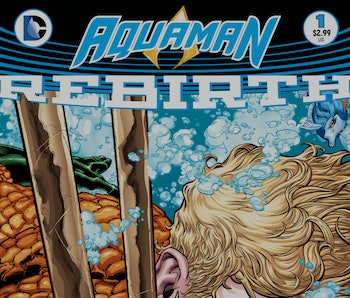 Why is Aquaman is a laughable hero? Despite his dominance over two-thirds of the Earth and a history as a Justice League founding member, pop culture has, by consensus, agreed the sea monarch superhero is lame. Even my best friend, a Ph.D candidate in marine biology who lives for the ocean, thinks the guy is a loser.

DC knows their aquatic hero’s reputation, addressing it with thinly-veiled barbs in Aquaman: Rebirth #1 from Dan Abnett, Scott Eaton, Oscar Jimenez, Mark Morales, and Gabe Eltaeb. The issue’s meta-textual arc of Aquaman being torn between identities — he’s half-man, half-Atlantean, accepted in neither Earth or Atlantis — heavily references how we all think Aquaman is a joke. As Warner Bros. and DC prepares the big-budget Aquaman from director James Wan and starring Game of Thrones alum Jason Mamoa, DC’s caution is obvious, as Aquaman slowly, at last, enters the domain of “cool.”

A prologue to Aquaman’s new series launching with DC’s Rebirth, Aquaman: Rebirth #1 is all set-up for the king of Atlantis, his emotional state as a married man, and who his enemies are. There’s the Deluge, a xenophobic Atlantean cell who just want to make the ocean great again, and also (spoilers!) Jackson, son of the super-villain Black Manta taking up his father’s mantle and vowing revenge (and serving as narrator for the issue).

Sandwiched within these is one whole page dedicated to how we as comic readers and general audiences have unfavorably received Aquaman. You can swap its talk about “dry-landers” for “mainstream culture” and you’ll see how heavy-handed the allusions are.

“But dry-landers do seem obsessed with the idea that he talks to fish,” Black Manta narrates in the issue. DC (by way of Black Manta) tries to correct this notion, clarifying that Aquaman doesn’t talk to fish so much as communicate with them. It’s not the same as engaging in “meaningful dialogue.” But try making that distinction to anyone who doesn’t care until there’s a movie about it.

There’s even a light jab at non-comic fans (“land-dwellers”) who are ready to ridicule Aquaman without seeing his awesome feats (his stories), like when he saved San Diego in Wil Pfeifer’s American Tidal or his battles in Geoff Johns’s New 52 titles like The Trench, or pretty much Peter David’s whole defining run.

Abnett, the issue’s lead writer, uses this to fuel Aquaman going into Rebirth. This is an Aquaman who has something to prove to two worlds, Atlantis and Earth above sea. His fight with the Deluge stems from a xenophobic fury that a half-human dares to be the King of Atlantis. But for “air-breathers,” they think the guy is a clown. Rebirth presents an Aquaman ready to show there’s nothing funny about him. Given enough time and one Jason Mamoa tearing it up on the big screen, they’ll stop laughing.

Aquaman: Rebirth #1 is on sale now.

More like this
Gaming
5.19.2022 4:00 PM
MultiVersus could be the first Smash clone to truly challenge the throne
By Eric Francisco
Entertainment
5.6.2022 11:30 AM
You need to watch the best superhero movie franchise on Hulu before it leaves next week
By David Grossman
Entertainment
5.20.2022 11:00 AM
Why Moon Knight’s head writer refused to “go toe to toe” with Batman
By Eric Francisco
Related Tags
Share: