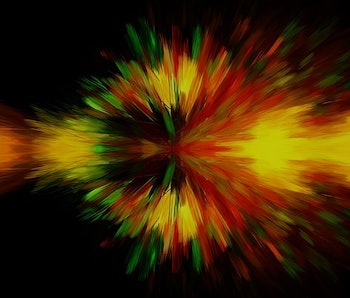 Teleportation technologies are common in science fiction because no one wants to watch Star Trek IV: The Literal Voyage Home. But Warp Speed and TK (why would they need both?) aren’t portrayed as similar technologies and it only gets more complicated in other franchises. When the soldiers in the Stargate universe travel to different worlds, it’s through an artificial wormhole created between two ancient Egyptian gates — as one does. The concept that books, shows, and movies (with the notable exception of Michael Crichton’s 2003 novel Timeline) seem to actively avoid is actual teleportation: quantum teleportation. The simple reason for this? Real-world physics is crazy complicated.

To understand quantum teleportation, you first need to understand the concept of quantum information. In the quantum world, the exact state of an atom or a photon can be considered a kind of bit of information. Thus, you can think of an organism not as a whole entity, but rather as the aggregation of different quantum bits, or qubits.

Quantum teleportation is essentially the transmission of qubits between two different locations, but it cannot facilitate faster-than-light transportation of information. Physicists who discuss quantum teleportation do so not in the service of eventually teleporting physical objects, but as a way to communicate — by sending along qubits from one place to another without having to attach information to a physical particle.

So how would quantum teleportation work? It’s tied to entanglement — the notion that two particles in spacetime are actually connected, and the movement or behavior of one will affect the movement or behavior of the other, even if they aren’t near one another. Without getting into the weeds of some really bizarre and nuanced physics, it’s thought that quantum entanglement could lead to the establishment of some sort of “quantum channel,” which would allow for a qubit to be moved through time and space, but not through observable space.

The quantum states of single atoms have actually been teleported in real world experiments. A 2004 study using optical fiber successfully completed quantum teleportation across 600 meters. A more recent experiment from 2015 teleported quantum particles in multiple degrees of freedom. It’s incorrect to say an atom itself has been teleported, but its qubit — the information encoded into the electronic state of the atom — has been moved across distances.

So when we talk about quantum teleportation as a way to, well, teleport actual objects, we’re doing so with some pretty large science fiction liberties. Nevertheless, it’s fun to think about how quantum teleportation as a way to actually move around instantaneously across large distances — and information is a constituent layer that helps to make up spacetime. You really are transporting something — it just isn’t the object you might recognize in a tangible way.

Stephen Hawking pitched a related hypothesis in 2015, when he said information might be capable of escaping a black hole. Like quantum teleportation, what’s moved isn’t the physical matter, but a layer of it — the most basic layer, in fact.

What Timeline or other works discuss when they put forward quantum teleportation as a possible mode of transport is not really the teleportation we’re thinking about. Nevertheless, we’ve already managed to accomplish quantum teleportation in lab settings and we might one day be able to harness it as a real form of communication — presumably after the advent of quantum computing. Still, it’s going to take us a while to travel through the cosmos. You can’t get there from here without going other places first.