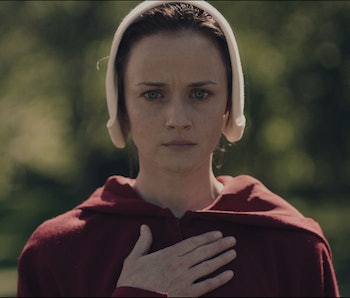 Alexis Bledel has been cast in a key character role that will deepen the intrigue of Hulu’s impending adaptation of Margaret Atwood’s classic novel The Handmaid’s Tale.

Already looking disconcertingly timely and filled with secrets, the show’s political relevance will be heightened by Bledel’s character, a handmaid named Ofglen.

As a brief refresher, in this dystopian male-dominated world, women are divided into strict societal categories. Handmaids are concubines who are not allowed to read or be called by a real name — “Ofglen” means that she belongs to a man named Glen, just as protagonist Offred (who will be played by Elizabeth Moss) belongs to a man named Fred.

In the novel, she’s Offred’s shopping partner, as Handmaids must travel in pairs to monitor each other’s movements. Offred initially doesn’t trust Ofglen, as she seems to be a doormat who is a true believer in this horrifying new society. But there’s always a question of whether she’s a secret revolutionary in an underground movement called Mayday.

With reports that Alexis Bledel’s Ofglen will be subversive and a lesbian, the show’s take on the character is leaning hard on the latter approach.

Spoiler alert — at the end of the story, Ofred finds a stranger in her place as “Ofglen”. Here’s the eerie scene from the novel:

“I am Ofglen,” the woman says. Word perfect. And of course she is, the new one, and Ofglen, wherever she is, is no longer Ofglen. I never did know her real name. That is how you can get lost, in a sea of names. It wouldn’t be easy to find her, now.

If the show decides to explore the underground movement further than the book does, that would be a very welcome development. At least we know her last words won’t be “Mom, I’m pregnant.”