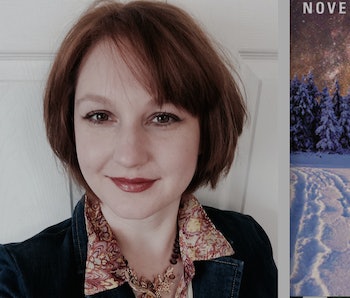 Laura Bickle is an urban fantasy author whose novel Nine of Stars is the first in a new speculative fiction series. Bickel spoke to Inverse about the intriguing genre of Weird West and its popularity after Westworld, magical realism, and more.

What does “weird fiction” mean to you?*

Weird fiction to me has a lot to do with magical realism. I love the idea of closed magical worlds — there are magical things going on underneath the surface, but not everybody in that world is aware that they’re happening. That just makes it that much scarier and more interesting. Weird West I think is a pretty broad category that’s getting even broader with cool things like HBO’s Westworld. I would definitely put that into Weird West. The television show and graphic novel Preacher, I would definitely categorize as Weird West. Anything that’s got sort of geographical tie as well as a supernatural element makes for a good Weird West story.

What the most exciting thing about the Weird West genre’s rise to prominence?

Well, the thing that I think is really exciting about Weird West is that there’s no formula. I mean, we do have some tropes that we inherit from Westerns: the stranger coming to town and the iconic images of the man in the black hat and the man in the white hat with the tin star. We inherit some of those, but there isn’t a set formula for how these stories have to progress. The field is wide open, which is a lot of fun. Personally, as a reader I want to be surprised. I don’t want to read the same story that I’ve read several times before. There really isn’t a box.

What is about this subgenre in particular that allows you to have no box?

I wanted to give Petra Dee, my protagonist, a good sidekick. I created Sig, who is a coyote who shows up at Petra’s trailer looking for lunch meat and he kind of stuck around. But I discovered as I wrote Nine of Stars that he wasn’t who I thought he was. So I’m going to be curious to see where that goes.

Are there any books or television shows or movies that you’ve particularly enjoyed recently?

I’ve really been enjoying Westworld recently. The thing that I really enjoy is that the female characters all have a great deal of agency. They have fully well-rounded motives, very complex characters, and there’s not an expectation that each episode is going to be tied up nicely and that there will be a certain type of ending. When we tune into shows like that, we want to see something new and see something that’s surprising. And I do.