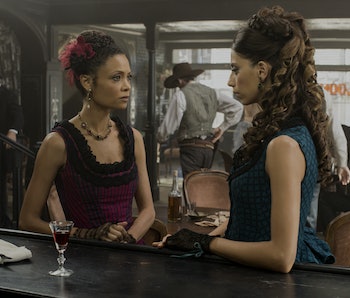 Now that the first season of HBO’s mind-bending sci-fi Western Westworld has drawn to a close, the show’s success is naturally being evaluated by its crazy plot twists and the payoffs to its mysteries. And while those elements are integral to the story, the show’s true greatest achievement has been the focus and depth it has afforded its female characters, particularly Thandie Newton’s Maeve and Evan Rachel Wood’s Dolores. The issues their stories raise have created a fascinating tension between the show’s audience and the characters it choses to focus on.

As a show with copious amounts of twists, hints, and “holy shit” moments, Westworld was practically made for Reddit, which has a heavily male usership. The show’s Wild West setting — a world of damsels in distress, saucy prostitutes, and cowboys, the most ubermasculine of archetypes — reinforces this notion by placing guests a historical time and place where anyone who wasn’t a white man had minimal rights. Coupled with the emphasis on sexual and violent fantasies the majority of the guests come to sate, it further reinforces the idea that this is both a man’s world and a man’s show. The setting only further empowers characters who look like the supposed audience to live their dreams, even if it means realizing an unfamiliar woman’s nightmare.

As an added dimension, hard science fiction — and particularly the conspiracy sci-fi subgenre — has always skewed heavily towards male protagonists (Blade Runner, The Matrix, Twelve Monkeys), in a natural reflection of its audience and writers. We’ve all seen a Philip K Dick adaptation; we know how this is supposed to go. But Westworld showrunners Jonathan Nolan and Lisa Joy use Maeve and Dolores to come in and subvert the expectations that this show is for a conventional male audience.

In spite of Maeve and Dolores’s variances, the underlying sentiment to their plotlines has been the same. Like most stories about robots becoming self-aware — recall Rachael’s sense of alienation in Blade Runner — Westworld tells a story about characters who are seen as “other” and are learning what it means to center themselves in their own narratives instead doing what pleases the people who label them. This trope has always reflected the traditional historical narratives of marginalized people in real life like women and people of color.

And like those marginalized people, Maeve and Dolores’s journeys have been about combating that by asserting their agency and taking control of their own minds and bodies. For Maeve, agency looks like escape, and for Dolores, agency looks like a mixture of self-actualization and vengeance. Telling a story about agency story through women is a deliberate choice that doubles-down on the show’s already feminist tropes and undertones.

The fact that Nolan and Joy chose to filter their ideas through the narratives of two female characters is of monumental importance — especially at a time when the concept of female agency over their own bodies has been heavily politicized in the real world. In “The Well-Tempered Clavier,” Logan (Ben Barnes) tries to assert his dominance over Dolores by saying, “Your world was built for me and people like me, not for you.” That line isn’t only there to convey that Logan is a dick, it’s there as a reflection of what male viewers attracted to sexually violent shows think … and sometimes say on the internet cloaked in partial anonymity.

Unlike the viewer, Logan and eventually William (as the Man in Black) have to face the consequences of their thinking and actions. After entanglements with an increasingly aware and violent Dolores, Logan ends up riding off into the sunset, naked and as a prisoner, while William becomes the worst version of himself, attacked and left bleeding in place he thought himself a god of. Maeve’s parting words to her lover Hector (Rodrigo Santoro) who she sacrifices in order to escape Westworld doubles as a gentle reprimand of would-be audience fantasies. “I’m sorry, Darling,” she tells him. “I haven’t authorized you to come with us. I’ve always valued my independence.”

In that regard, the audience is left feeling as alienated and abandoned as the robots once were. Conversations about the consequences of marginalization and rape culture can seem alienating to those who aren’t indoctrinated in it. For an average male Westworld fan, it’s often easier to avoid the topic entirely. But by filtering these ideas through a fictional lens, Westworld is presenting them to a viewership that does not normally have to consider them in a provocative yet accessible way.

Twists and mysteries and “holy shit” moments aside, then, the series has infused a male-dominated genre with complex feminist discourse, which is no small achievement. Westworld has not been shy about borrowing from Shakespeare — but flowery quotes aside, the show has truly succeeded at holding the mirror up to nature, making us question the nature of our reality.

More like this
Culture
Sep. 30, 2022
This deeply underrated 2013 sci-fi cyberpunk flick just hit Netflix
By Ryan Britt
Entertainment
Oct. 3, 2022
Why is House of the Dragon so dark? The real reason has nothing to do with your screen
By Dais Johnston
Entertainment
Sep. 27, 2022
House of the Dragon Episode 6 reignites a heated fan debate
By Dais Johnston
Related Tags
Share: