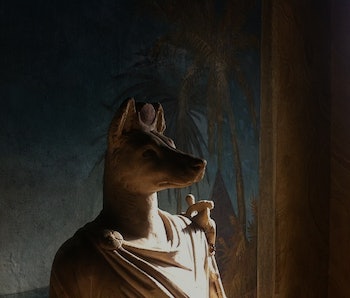 In Ask a Prophet, we use our alien probes on the brains of sci-fi, fantasy, and speculative fiction writers. This week we spoke to Tim Powers, who has won the World Fantasy award for his novels Last Call and Declare and the Philip K. Dick award for The Anubis Gates. He has also been nominated for the Nebula award and the Locus Fantasy award, among others, and he was friends with Philip K. Dick.

What comes first for you when you’re writing — the concept or the characters?

Usually I stumble across some intriguing inconsistency in a book I was reading for fun, like history or a biography. And I’ll think, ‘That makes no sense.’ Of course, real history is full of events and decisions that make no sense. I’ll think, ‘What sort of supernatural situation could there have been in which those actions are not illogical and apparently random?” I begin to read with a sort of paranoid squint, looking for further clues, and I build up the supernatural backstory; the hidden cause for all these events.

What’s the ongoing allure of secret histories and conspiracies?

I think there’s a kick in getting the impression that you are finding out the real and colorful story behind the apparent mundane world. There’s a thrill to saying, ‘Aha! Now I see the secret machinery behind what everybody else thinks is the whole story.’ It started in college when I read Thomas Pynchon’s The Crying of Lot 49 which is about a postal delivery system that has been going on behind the scenes secretly for hundreds of years. Pynchon makes it sound so mysteriously glamorous and dangerous. It really made an impression on me.

And it’s always fun when you can point to real events and say, ‘Those were not as random as history records. Those were all signs and clues to this big secret thing that has been going on covertly for centuries.’ There’s a kick, certainly for a reader of such things, to think, ‘I wonder if that could be true!’ Even when I’m putting together my hidden explanations of historical enigmas, often late at night I’ll think, ‘Oh my God, Powers, you’re not making this up, you’ve stumbled on a real story!’ Then I go to bed, and in the morning I’m sane again.

But, you look at all the stuff like Area 51 in the Mojave Desert where they theoretically have dead aliens on ice or people who point out weird symbols in the dollar bill and claim that they indicate some Illuminati conspiracy, there’s that initial impulse to hope such things are real.

Do you keep up with other novels in the genre?

I read “The Da Vinci Code,” which I thought could have been better in that his secret history details were too easily disproved. It was too easy to say, ‘I want to check that out’ and look at an encyclopedia and say, ‘Oh, that didn’t happen.’ The secret backstory should hold up to at least a quick check-out.

How do you go about ensuring that it holds up?

I make it a rule that I won’t contradict natural history or rearrange dates on a calendar. Of course there’s probably some details I miss, but I want the plot to be a result of those unchangeable facts, rather than the unchangeable facts having to make room for the convenience of my plot.

Since his death, there has arisen a kind of caricature of him. If you just read casually, you’d get the impression that he was this drug addled, crazy visionary who imagined God spoke to him. Actually he was a very sociable, funny, realistic, generous, gregarious friend. Not at all the William Blake crazy mystique the general impression has become. If you read his last few books, like VALIS and The Transmigration of Timothy Archer, you can see that this was a rational, skeptical, humorous person. But it always does annoy me when people say, ‘Didn’t he like live in a cave and wander up and down the street talking to himself?’

And David in his novel VALIS is based on you, right?

The first half of the book is totally autobiographical. I was a college student in those days. When I read VALIS and looked at my journal for the same times, if he says it was raining on this day, I look at my journal and say, ‘Wow, it really was raining on that day!’ David was based on me and Kevin was based on K.W. Jeter and Sherri Solvig was based on Doris Sauter. Most of the conversations he says we had in VALIS we really did have. K.W. Jeter really was always thinking that the death of his cat disproved God. David is portrayed as kind of simple-mindedly Catholic, and I’m Catholic, though I don’t think I’m simple-mindedly that. But it really was a very accurate picture of those days.

How did you meet?

He had been guest of honor at a convention and when it ended, he simply didn’t go home. He told the convention people, ‘I want to stay, can anybody put me up for a while?’ So he wound up living in Canada for a year or so and then attempted suicide and wrote to a professor at Cal State Fullerton saying, ‘I’ve got nowhere to go.’

The professor read that letter to his class. Two girls said, ‘He can come stay with us.’ I knew the two girls. And they said, ‘We’re going to the airport to pick up Philip K. Dick, want to come along?’ I said, ‘Sure.’ Luckily I had not read him much at that point, or I would have been too awestruck to speak. But I only read his books after I had met him, and therefore I was awestruck by increments. It didn’t prevent me from being able to speak in his presence. I knew him from then — which was 1972 — until his death in ‘82.

More like this
Entertainment
Jan. 13, 2023
Foundation Season 2 could fix the worst thing about the Isaac Asimov books
By Ryan Britt
Culture
Jan. 20, 2023
Why The Lost World is better than all the other Jurassic Park sequels combined
By Ryan Britt
Entertainment
23 hours ago
Attack the Block sequel will take a page from the two greatest sci-fi sequels, director says
By Eric Francisco
LEARN SOMETHING NEW EVERY DAY.
Related Tags
Share: