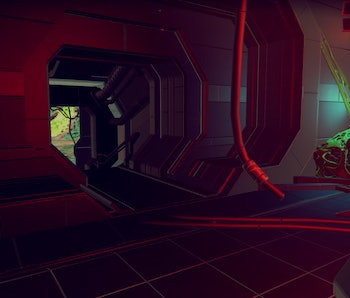 Introduced in the Foundation 1.1 update following the original release of No Man’s Sky back in August, Survival mode is a much more challenging take on the game. You’ll still be gathering resources for your journey, consistently hunting for upgraded equipment, and exploring the universe around you, but survival is just harder. Resources are scarce, life support depletes faster, and planets are usually more hazardous. You’ll always have to prepare yourself for the worst. Here’s a few practices that should make the transition a little easier.

Just like the original No Man’s Sky experience, you’ll start a game of Survival mode stranded on a random planet with a basic set of equipment you need to repair. Once you’ve fixed up your scanner and visor, you’ll have to start the trek to your crashed ship over the horizon so that you can fix it up to leave the planet.

But you can make these repairs from a distance by transferring items over to your ship. Since most of the resources you need are going to be a 10- to 15-minute walk from your ship’s location, you’re better off repairing them from a distance provided you find a resource-rich area. This saves you valuable time, suit resources, and suit inventory space, allowing you to get a better start without wasting all the resources you collect before you even leave your first planet.

Take Advantage of the Quick Menu

One of the biggest additions in the Foundation update has largely gone unnoticed. It adds an entire Quick Access Menu which heavily streamlines basic inventory access. Instead of having to open your entire inventory and scroll through to refill each piece of your equipment with resources, the new menu allows you to cycle through with the press of a button and replenish equipment while you roam around. It may not feel like a big difference, especially if you’re used to the previous system, but boy does it save you time when you’re out exploring or in a dangerous situation and your life support starts to run low. While it may take a bit to get used to pressing the D-pad down (on console) or X (on PC), it’s a change worth practicing for Survival mode.

Plutonium Is Rare, Use It Wisely

If you’ve played No Man’s Sky in any capacity, you’re probably already familiar with the beautiful red crystals scattered about the landscape that yield Plutonium. While abundant in the normal version of the game, Plutonium is a much rarer resource in Survival. Since it’s used to power your ship’s launch thrusters, you’ll want to gather and maintain enough for at least launches so you never get trapped on a planet while exploring. Keeping a larger stash of Plutonium will simply ease the exploration process, preventing you from wandering aimlessness for hours looking for crystals instead of using your ship to travel at a much faster pace.

Don’t Use Resources If You Don’t Have To

Survival mode slows down the pace of the game drastically by forcing players to consider their decisions while on a journey to the center of the universe. Every single decision has a cost measured in resources, and now every resource is a much more valuable commodity. Always keep this in mind when you’re playing, especially if you’re an impatient explorer like myself. Walk to locations instead of running to conserve your life support power, use caverns and buildings to replenish your hazard protection without using Zinc, and most importantly, plan your movements so that you don’t get stuck in a hazardous location without an adequate amount of resources to survive.