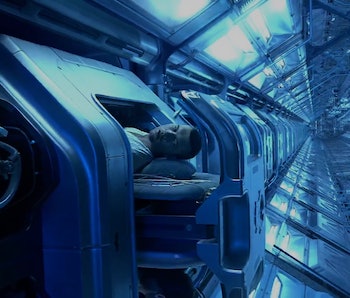 The ability to freeze things is our greatest weapon against the passage of time. To a frozen fish fillet or chicken nugget, physical aging is barely a threat: the cold protects them indefinitely against the hot degradation of bacterial death. Better still, when they are finally thawed, they are practically as good as new. Cryonics, a hypothetical science cited as a human preservation technique in sci-fi movies like Passengers and Austin Powers, is a proposition that our bodies, like meat, will be eternally preserved by turning them into ice.

The problem is, a frozen body isn’t so easily defrosted.

Cryonics’ biggest obstacle is our physical composition. Two-thirds of the human body is water, which means that some 66 percent of the human body’s cells will turn into ice if it’s not frozen correctly. And ice, as anyone with a freezer knows, takes up more space than water in its liquid form. There’s no way our fragile cell walls and veins could contain water’s rapid expansion, driven by the formation of crystal lattices of H2O, once our bodies are dropped into a freezer. If the point of cryonics (that’s the process of freezing entire bodies; cryogenics is the study of biology at low temperatures as a whole) is to someday unfreeze a human, maintaining the body’s integrity is key. That’s why cryonics researchers put all of their efforts into perfecting a process that stops our fluids from freezing into ice, turning them instead to glass.

Unlike ice, glass contains no crystals that might fracture or stab the other contents in the liquid. The idea behind “vitrification” — named for the French verb for converting things into glass, vitrifier — is that the formation of ice crystals in our cells, which would inevitably puncture or deform the machinery inside them, can be prevented by adding the right types of antifreeze to our bodies. While we associate antifreeze with the blue stuff we put in cars in the winter, it really refers to any molecule that can be mixed into a solution with water to disrupt the crystal-forming process. It is a lot harder for water molecules to find each other and form a solid lattice when other, bigger molecules are getting in their way. In the same way a slushy alcoholic cocktail or a fruit sorbet never form a solid mass of ice because they contain substances other than water, the fluids in a body filled with antifreeze molecules — or “cryoprotectants” — will turn much more viscous, but never quite solid.

This phenomenon already happens in nature: certain species of frogs, for example, produce glycerol or glucose — tiny, natural sugars — that wedge between water molecules, keeping their fluids running, albeit slowly, at subzero temperatures. Scientists trying to make cryonics work have struggled to find substances that can do the same under even colder conditions — without killing us. As of right now, options are limited: as a review of cryoprotectants in Rejuvenation Research noted in 2015, our best bets are on molecules like ethylene glycol and propylene glycol — literally those used in cars — and other known preservatives like methanol, formamide, and butanediol. All of these are pretty toxic, and especially so at high concentrations.

A person that undergoes cryonic preservation begins the vitrification process almost immediately after they are declared brain dead. As the body is rapidly cooled to a temperature just slightly above the freezing point, the heartbeat and respiration are artificially maintained as heparin is injected to prevent coagulation and cryoprotectants are perfused into the body. When vitrification is complete — full glassiness occurs at around −196°C, according to a 2015 report in the journal Neuroethics — the body is then fully submerged in liquid nitrogen at a temperature of −196°C.

Tests on frozen organs have shown that cryonic freezing with cryoprotectants works to a certain extent, depending on the organ, but damage still results from the toxicity of the antifreeze or from errant ice crystals that manage to form.

Despite these setbacks, cryonics companies like the Cryonics Foundation and the Alcor Life Extension Foundation, which just froze its 148th patient in August 2015, are already using techniques like vitrification in the hopes that future researchers will have figured out how to bring bodies back to life. Only time will tell if this experimental technique actually works.

More like this
Science
7.5.2022 12:00 PM
The greatest dinosaur sci-fi franchise ever reveals a problematic genetics debate
By Andrew Maynard and The Conversation
Science
6.24.2022 1:30 PM
The best post-apocalypse movie of the century reveals a dark debate over humanity’s future
By Tara Yarlagadda
Science
7.2.2022 12:00 PM
Why is my cat scratching furniture? The answer might surprise you
By Tara Yarlagadda
Related Tags
Share: