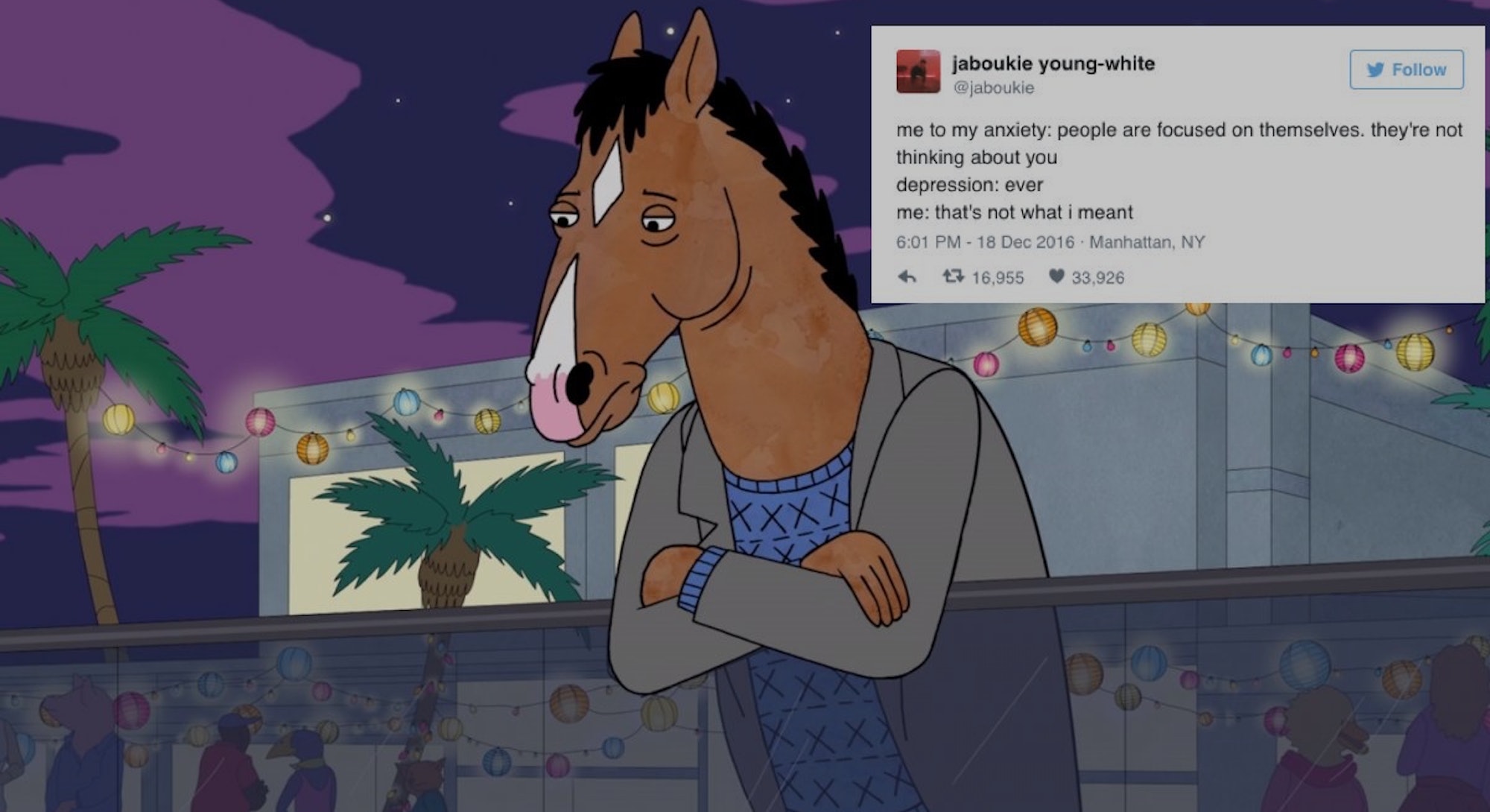 Jokes about anxiety and memes depicting the effects of depression creeped into Twitter feeds and Tumblr dashboards in 2016. As discussions about mental health became less taboo online, relatable feelings went viral as an increasing number of candid creators began to drive the conversation about mental health forward with humor.

The internet has long provided spaces for opening up about topics like depression and given people suffering from a variety of ailments platform to discuss them frankly and on their own terms. But sites and message boards on which mental health issues have been historically addressed have frequently felt rope off from or within more entertainment- and news-driven social networks. In 2016, jokes changed that, mainstreaming sentiments that would have previously felt difficult to surface. And it makes sense that this change happened during a year in which people were given good reason to feel anxious about the future. Appropriately enough, anxiety created the ideal conditions in which to address anxiety.

“2016 was legitimately straight trash,” says comedian Jaboukie Young-White. “Good music, great gowns, but politically, socially trash. And there’s so much information disseminated online that we’re constantly aware of what we think is wrong with the world, but we feel severely unequipped to do anything about it. I think that helplessness contributed a lot to the popularity of depression related content this year. When you just read an article about how another one of your basic human rights is being challenged, you need to laugh to stay sane. Plus, mental illness has been so taboo for so long. Now that there’s an outlet to talk about it, we’re being blessed with an outpouring of subversive, dank memes about mental health.”

Young-White is one of the many people helping normalize public discussion of personal mental health problems by addressing his own struggles with comedy. One of his tweets about the tug-and-pull relationship between anxiety and depression even caught the attention of J.K. Rowling.

“I think the current American zeitgeist is based on fear and mistrust,” says Young-White. “We don’t trust each other, we don’t trust the government, we don’t trust the media, and we’re being gaslighted by a sentient, wigged Cheeto, so there’s this pervasive sense of anxiety in the culture. Looking at the individual level, we’ve all struggled with personal challenges or traumatic events. All of us have the potential to be mentally ill at some point in our lives. Statistically, a lot of us will.”

According to the National Institute on Mental Health, approximately one in five adults in the United States experiences mental illness in a given year. Over half (50.6 percent) of children aged 8 to 15 with mental disorders received treatment in the previous year. And suicide is the tenth leading cause of death in the United States, the second leading cause for people between the ages of 15 and 24.

Considering how many people struggle with mental health at one time or another, it makes sense why memes and jokes about those experiences prove to be so popular online. People are always creating ways to distill moments or situations into memes. Others in their networks who can relate will then gladly retweet or reblog.

Evil Kermit was one of the biggest memes of 2016 and many of its examples could be viewed as being about mental health. Sometimes that dark voice in your mind that tells you to skip out on class or just stay in to watch could be rooted in anxiety or sadness, keeping you from responsibilities and social settings because you simply need a break from everything. Most might not catch on Evil Kermit’s deeper meaning right away, but adoration and sharing of the meme further helps normalize these sorts of ideas which are extremely relatable.

Furthermore, anxiety and depression are often characterized in memes as entities. By turning these disorders into actual beings, it’s a little easier to confront them. They aren’t these nebulous, abstract things to fear. Anxiety becomes that jerk causing you to overthink, depression the asshole keeping you in bed all day, or the inner Dark Kermit whispering in your ear.

Throughout the year, there’s been plenty of tweets and jests about mental health that have received a lot of attention across the internet. This visibility is important, but at the same time there’s very much a dark aside to the relatability and virality of this sort of content: getting caught up on the high from likes and shares.

Research has shown that Facebook likes can affect people’s self-esteem. Earlier this year, Cornell researchers found that people with a sense of purpose are less likely to be impacted by how much engagement they got on posts. When someone is dependent on social media attention to make themselves feel fulfilled, it’s a volatile situation.

“I think what’s relatable and funny about mental illness is the honest struggle or hope to be better. We’re all just trying to be the best version ourselves. We’re constantly failing, shit sucks, but at least we’re genuinely trying,” Young-White says. “There’s absolutely a negative side to being rewarded for your mental illness. Associating a dopamine rush with harmful behavior could cause a Pavlovian cycle of self destruction by associating unhealthy thought patterns with reward. But I’m not interested in self destructing for the entertainment of others, and I don’t wanna see other people do that either.”

Reblogging Tumblr posts about mental health might be easy, but engaging in an honest discourse requiring introspection never is. It requires a sense of self as well as a sense of context.

“It took me a minute to get comfortable talking about my mental health period,” Young-White says. “I originally spent a lot of time mitigating what I was experiencing. As a first generation American, I had a lot of guilt about being depressed or anxious like ‘oh you don’t feel like going to class at your private liberal arts college? well, your parents rode a belligerent donkey for five miles every morning to a school with one room after feeding goats and bathing in Jamaican rainwater.’”

Eventually, the comedian started seeing a therapist and met friends having similar thoughts and realized that many of the things he was feeling were completely valid and common. Once he came to terms with those thoughts, he finally felt comfortable opening up about mental health in his comedy and honestly talking about it. To him, it’s important for people to tell their stories because there’s always someone who might need to hear it for their own fight.

Just this past year, celebrities including Zayn Malik and Kid Cudi have been frank about things like eating disorders and depression. And unfortunately, the world had to say goodbye to Carrie Fisher, who was a public figure unabashedly honest about past problems like addiction.

“A lot of cisgender men are actively punished for emotional openness from a young age, so we grow up and have no emotional literacy. I don’t think a lot of guys are ‘the quiet, butch, strong type’ because they think it’s cool, I think some guys just literally never learned how to recognize and deal with their emotions,” Young-White says. “I think it’s amazing that they’ve spoken so candidly about mental health as men, and more specifically and men of color. Any time emotional expression can be made en vogue for men, that’s a great thing, I’m all for it.”

With people like Young-White, big names like Kid Cudi, and others breaking the silence and cracking jokes about mental health over the past year, these sorts of struggles were finally in the spotlight. They might not have been the biggest memes of 2016, but they were some of the most important.