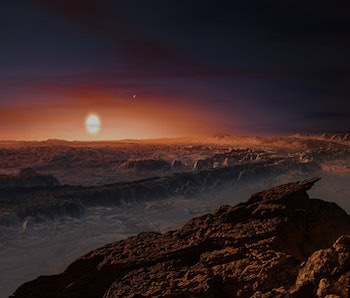 Scientists at Messaging Extra Terrestrial Intelligence (METI) will attempt to initiate first contact with any potential alien life on Proxima b by the end of 2018. The researchers hope to raise around $1 million per year to repeatedly beam radio signals to the nearby exoplanet for the foreseeable future. It would be the first focused, sustained effort of its kind.

“If we want to start an exchange over the course of many generations, we want to learn and share information,” METI president Douglas Vakoch told the Mercury News.

The San Francisco-based METI was founded just last year under the better-known organization SETI — Search for Extraterrestrial Intelligence — where Vakoch was also the former director of Interstellar Message Composition.

The transmission could comprise either radio or laser signals. The exact message content is still to be determined, but it won’t be the kind of spoken-language message we more commonly associate with communication. Instead, it’ll be a much more universal language (no pun intended, really, I promise) — math.

“To be intelligible, any message to extraterrestrials needs to be written in a universal language, and that won’t be English or Swahili,” Vakoch told astronomy.com. “We begin with mathematics, because it seems likely that scientists on any world will need to know at least the essentials of math.”

While many are praising METI’s initiative in taking decisive steps to reach out first rather than simply waiting by the proverbial phone, not everyone is sold on the prospect. Some astronomers and physicists, including Stephen Hawking, have expressed concern that efforts like this are too bold a step considering we have no idea how hostile or powerful aliens might turn out to be, should we end up actually finding them. After all, they could easily be much, much more biologically and technologically advanced than we are.

Proxima b orbits red dwarf star Proxima Centauri and is the exoplanet closest to Earth — just 4.25 light years away — and thus quite likely our best bet for finding and contacting alien life. You might recall it as the planet that sent the internet into hysterics when it was discovered in August. This is because while we do find exoplanets with some regularity, they’re almost always too far away for us to do anything with. Proxima b is our most notable exception. That said, even if aliens do get METI’s messages, it could be generations before we receive a response, if ever. As with all things in the field of alien-hunting, there are no guarantees.

More like this
Science
20 hours ago
Aliens could move entire planets to send a math-based code to other civilizations
By Kiona Smith
Science
8.2.2022 9:15 PM
Alien friendly? A nearby planet poses a vexing habitability puzzle
By Kiona Smith
Science
8.7.2022 9:00 PM
Scientists now know how likely you are to be killed by space junk
By Monica Grady and The Conversation
Related Tags
Share: