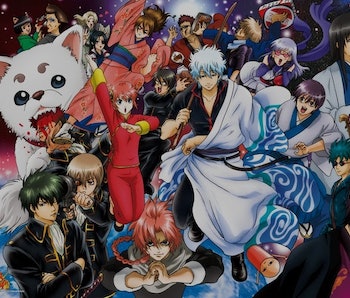 This year, 2017, will definitely have to come out of the corner swinging to uplift our already dismal perceptions of the upcoming New Year and the eventual end of the world. Luckily, the 2017 anime seasons will definitely be a big year for anime fans. We will no longer have to gouge our eyes out and begrudgingly watch old episodes of Attack on Titan or Seven Deadly Sins. We will also be able to enjoy several live-action anime that is debuting this year like Ghost in the Shell and Fullmetal Alchemist. The year is starting off strong with a couple bangers that are definitely worth watching if you have not begun already. Sadly, many of the anime on this list are several seasons deep so you might have some catching up to do if you want to get it in before the New Year starts. But, who needs sleep, right?

According to Anime News Network, Gintama is the #1 highly anticipated anime of winter 2017. And, that rightfully so. Gintama has been around since 2003 and became a full anime series in 2006. It features samurai and aliens, two things that we would think would make for a weird combination but somehow made a damn good one. If you like humor, then Gintama is the show for you. However, if you did not keep up with the anime, then you will have a lot to catch up on with the show at 316 episodes. Gintama will also be receiving a live-action movie in 2017. It’s a good year for Gintama fans.

Blue Exorcist is finally returning after very successful first season in 2011. If you do not know about Rin and the world of Blue Exorcist yet, do not worry. We prepared a short guide that breaks down everything that you need to know before the start of Season 2. The first season is also only 25 episodes so this can easily be watched before the ball drops.

There’s something with anime that its able to take the most obscure sports and turn into a great show. Yuri!!! on Ice was the latest anime to do so. Yowamushi Pedal is no exception. It is a funny anime about a sport that most people know absolutely nothing about outside of Lance Armstrong. And as with most sport anime, it features an awkward kid who is somehow gifted in this particular sport, but still faces setbacks due to their personality or physical stature. There is some catching up that you will have to do with this anime, but is definitely worth it.

5. Tales of Zestiria the X

Originally a Japanese role-playing game, the show follows Sorey, a young man blessed with the power to battle against the Hellion, creatures created from negative emotion. The game got okay reviews, but the reviews of the anime are even better. The plot makes for an excellent story and the artwork is not too shabby either. This is the second season of the show, but it is relatively short so you can definitely catch up in time.