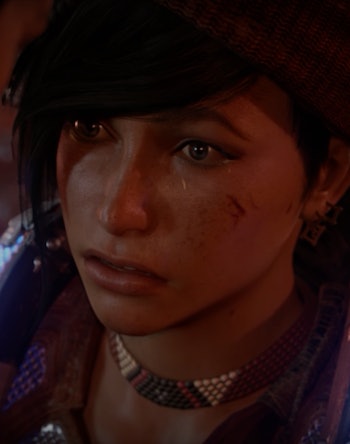 Video games have the power to illicit strong emotions in all of us, especially in how they show pain and loss. It could be the death of a beloved character who’s been part of an iconic series for years, or an offscreen tragedy that reveals more in what isn’t shown than what is. When we play video games, we aren’t just watching characters live their lives, we’re living those lives with them. In that sense, when those characters are killed, it’s like we’re losing someone very close to us. 2016 was filled with many highs and lows in video games, and said goodbye to many fan favorites, some who’ve been in our lives for years.

So here are the saddest video game deaths of 2016. Warning, this list is full of spoilers … and sadness.

The moment the Alliance sets foot on the Broken Shore at the beginning of Legion, it’s clear somebody’s not going to make it. King Varian, acting leader of the Alliance, sacrifices himself for the greater good, fighting the infinite demons of the Burning Legion so that his compatriots can get to safety. This one hit hardest for thousands of fans, as King Varian’s been a key part of the series for years.

The only thing worse than watching someone die is having to kill them, even if it’s mercifully. During the game, the Swarm raids an Outsider village and takes Reyna Diaz into captivity. After Marcus, Kait, and the team defeat the Hive Boss, they come across Reyna, who’s been mutated by the Swarm. Reyna asks Kait, her daughter, to cut the flesh connecting her to the hive, even though it’s the only thing keeping her alive. Kait tearfully complies, even though it means killing her own mother.

Whoever said “It’s always darkest before the dawn” never played The Walking Dead: A New Frontier. In the first episode of Telltale’s latest episodic series, Javier Garcia succeeds in rescuing his sister-in-law, nephew, and niece from a horde of zombies, much to everyone’s relief. However, right after his niece Mariana picks up her headphones from the dirt, she’s shot in the head by a member of the New Frontier. It’s sudden and devastating, but not entirely unexpected. Given what we learn about the leader of the New Frontier later on, this death feels especially horrific.

There are plenty of ways the ending to Blood and Wine can go, and the worst of them is simply devastating. If Geralt can’t convince Anna to deliver justice, or Syaana to make amends, then Syanna will stab her sister in the back, leading to a tragic double-murder that throws the kingdom into chaos.

Frederick Bishop, aka “The Pride of Australia,” is one of several playable protagonists in the Battlefield 1 campaigns, and he embodies the term “noble sacrifice.” During the battle at Gallipoli, Bishop takes it upon himself to ensure that one relatively naive young man, Jack Foster, makes it through the day. He goes so far as to single-handedly take an Ottoman-held fort so Foster and his fellow soldiers can get to safety. After being fatally injured, Bishop learns that Foster escaped, and he dies happily knowing he did the right thing.

Protagonists die. That’s a given. Most of the time, it’s as easy as a “You’re Dead” screen, or falling over and grunting before the re-spawn. However, Mirror’s Edge: Catalyst chose to make players suffer through the full-on nightmare that is falling to one’s death from an impossible height. It’s definitely one of the most unique player death portrayals in modern video game history, and it gives the game a new depth and player connection. Death should never be trivial, even if it’s the fifteenth time you’ve failed to stick the landing.

King Regis’s death wasn’t shown in Final Fantasy XV; it was in the CG animated film Kingsglaive, but here we see the effect it has on his son. Noctis learns of his father’s death from a newspaper, and it has a lasting impact because of what we’ve seen in their relationship. In their last interaction, Noct shrugged off his father’s farewell, not realizing that it would be the last time they would ever see each other. He didn’t know how much he had to lose until after it was already gone.

8. Virginia — Everyone/ No One / The Buffalo

This is so much death and sadness in Virginia, but most of it is shrouded in Twin Peaks-style mystery, so it’s impossible to determine what exactly happened. All I know is that I left that game feeling like everything had gone to hell. Also, that poor buffalo.

Lincoln Clay returns home from serving in Vietnam and agrees to help Sal Marcano with a few criminal chores in order to bail out his adoptive father and brother, who are in Sal’s debt. Unfortunately, Sal Marcano is not one to forgive previous slights, and proceeds to “Red Wedding” Lincoln’s entire family and leave the veteran for dead. It’s a vicious, gruesome scene that understandably motivates Lincoln to dedicate everything he has to taking Sal Marcano out.

Horatio Carlin’s one of the best characters in Watch Dogs 2, a young man from a troubled background who used his skills and intelligence to get a job at one of the most prestigious companies in the world … while also working as an underground hacker against the very corporation he was paid to protect. He’s smart and thoughtful, providing some solid insight on the nature of racism in the tech industry. He’s killed for no other reason than the Tezcas wanted information on other members of DedSec, which felt really cruel.

Sometimes the most tragic deaths are the ones we don’t see. Throughout Firewatch, we’re thrown through so many loops, we don’t know what is real or not. But the sad truth resolves around one father trying to hide the death of his son, Brian Goodwin, from both himself and the world. It’s truly awful to spend minutes climbing through the caves, only to turn a corner and find Brian’s mummified body at the bottom of the drop. It’s closure, but the worst kind of closure.

It doesn’t matter if it’s on film, or in a video game starring Legos, Han Solo’s death will always be devastating.