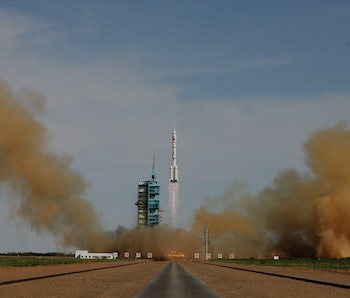 China provided more details about some of its major space program goals over the next five years on Tuesday, reiterating plans to be the first country to land a probe on the far side of the moon by 2018, and land a probe on Mars by 2020.

“To explore the vast cosmos, develop the space industry and build China into a space power is a dream we pursue unremittingly,” said a white paper released by the information office of China’s Cabinet.

Chinas space program has made serious strides in the last decade. Most recently, the country launched a new space station and completed a month-long crewed mission in orbit.

Nevertheless, the space program continues to be mired in dubious projects that seem to exist solely to generate hype. The lunar probe on the dark side of the moon, for instance, has no real value besides being a first-ever achievement. The white paper claims studying dark side will help shed light on the formation of the moon, but it’s not clear how or why.

And this is hot of the heels of the even more skeptical claim that China has successfully tested the mythical EmDrive propulsion system.

Although a landing a lunar probe on the far side of the moon would be a first for human beings, the real spotlight should be on the Mars probe. The white paper is explicit about wanting to fit the probe with the kind of instruments that would allow for a sample return of Martian rock and soil — presumably as part of research into habitability and extraterrestrial life on Mars.

This would put the Chinese probe in direct scientific competition with NASA’s Mars 2020 rover, and ESA and Russia’s ExoMars rover — both of which are seeking answers to the same investigative questions. Mars 2020 is specifically designed to help facilitate a future sample return mission.

One thing is for sure — China wants to become the preeminent space power of the world, and the next five years are simply the first steps towards that goal.