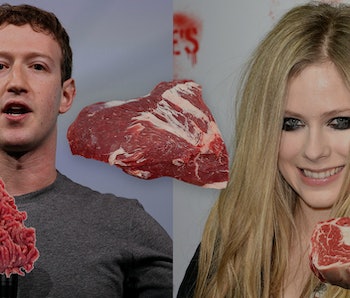 Someone wise once said: Opinions are like assholes — everyone’s got one. In 2016, it felt like everyone had five. With the internet producing soapboxes with little regard for their use, celebrities, politicians, and industry leaders all stepped up to speak nonsense to perceived power, each demonstrating an acrobatic ability to lodge their head very far up their opinion. If 2016 was a year of revolution, it was also a year of beef. More specifically, it was a year of dumb beef.

What is dumb beef? Dumb beef is where pettiness meets umbrage meets a nonsense issue. Importantly, dumb beef cannot lead to instructive or educational resolution. Dumb beef must lead toward rhetorical mic dropping, ante upping, or awkward silence. Also, to become dumb, beef must be consumed. Twitter serves dumb beef daily, Facebook competes on occasion, but is less celebrity-centric, and reality gets in on the game occasionally, albeit in less compelling ways.

The final thing about dumb beef is that it must be inconsequential. If dumb beef becomes real beef and that real beef leads to an elucidating cultural conversation than the beef wasn’t dumb to begin with. But don’t worry: The 10 dumbest beefs of 2016 didn’t lead to any realization or lessons learned. They were just dumb and glorious.

The Broke With Expensive Taste rapper was no stranger to online beef, considering her past feuds with Perez Hilton and just generally being awful on social media. But crap really hit the fan when Banks tweeted up a storm accusing Zayn Malik of copying her, eventually using a homophobic slur against him. Other celebrities tweeted about the fight, including Disney Channel’s Skai Jackson. Banks then came after the teen, the two exchanging clap backs with Jackson coming out looking just so much more put together. It was dumb for Banks to start drama in the first place, but without the world wouldn’t have been graced with Jackson’s savagery.

The consequences of Thiel’s beef with Gawker are probably the most dire on this list, but his problem with the media company constitutes as one of the pettiest. Upset with coverage about himself from years prior, including publishing a story about his sexuality when it was already well known in Silicon Valley that he was gay, Thiel helped bankroll Hulk Hogan’s lawsuit against Gawker. In the end, Thiel and Hogan came out on top with the jury awarding the ex-wrestler $115 million in compensatory damages and $25 million in punitive damages. Gawker filed for bankruptcy soon after. Meanwhile, Thiel could be seen checking off “destroy Gawker” on his to-do list from 2007.

If you come for your ex, you better be careful. Kanye West originally took aim at Wiz Khalifa when he thought the “Black and Yellow” rapper was talking shit about Kim Kardashian using the abbreviation “kk” when he was actually just tweeting about weed. Kanye went off in a chain of tweets, bringing both Khalifa’s ex-wife Amber Rose (who West also dated) and son Sebastian Thomaz into the rant. But Rose wasn’t just going to be caught in the crossfire — she fired back and shut down Kanye with the hashtag of the year. It was yet another dumb beef started by a dubiously unaware celebrity that spiraled into an iconic smackdown. Kanye needlessly got himself involved in a Twitter spat with just erupted in his face.

During early 2016, two Twitter accounts that both used Thomas the Train screenshots to make memes got in a scuffle over intellectual property. @ThomasReacts_ stole jokes from @Thomas_Reacts, and the locomotive genius was not having it. The original started coming after the plagiarizer who just sort of shrugged off the situation and boy did things get rowdy. Yes, stealing jokes on the internet is a huge problem. But to have a Thomas the Train triumphing this moral was just so damn ridiculous.

6. MRAs vs. the Ghostbusters

Self-described “traditionalists” took issue with the all-female reboot of the classic Ghostbusters, and just couldn’t shut up about the discomfort that seeing a cast of ladies taking down the ghouls of New York City. It was an idiotic argument rooted in sexism, something that just continues to rear its ugly head. In the end, the likes of four funny women busted some ghosts along with some ugly trolls.

This beef was more spoiled if anything. After Kim Kardashian posted a nude selfie to Instagram, Neighbors 2 actress Chloë Grace Moretz had … thoughts. It was an overall just bad situation where Moretz should have just stayed in her lane. Trying to lecture the Queen of Selfies kicked off the Twitter brawl, with fans of each starlet coming to their defense and many others majorly rolling their eyes at the whole thing. Kardashian vs. Moretz brought up conversations about female empowerment and feminism, but other than that it was just a major “oof.”

Steve Rogers and Tony Stark finally got into a disagreement that had them fighting one another in their gear. Iron Man just wouldn’t let Captain America save his buddy Bucky Barnes, and this stirred up a bunch of other feelings about government intervention in their superhero shenanigans. Next thing you know, the friend group is divided and an airport is totally demolished thanks to all the drama. Jeez guys, couldn’t you find a more adult way to sort out your feelings?

We could have made an entire list of President-elect Donald Trump’s dumb beefs, but we thought it was best to just highlight one. Still peeved about Twitter CEO Jack Dorsey axing an emoji for #CrookedHillary during the election, Trump went into true petty mode and uninvited Dorsey from a meeting with tech titans. This also came after Twitter developers were explicit that they would not allow their data to be used for a Muslim registry, something that Trump’s administration has hinted at more than once. Trump simply appears to have a problem with Dorsey’s company simply because they have the balls to stand up to the Cheeto-encrusted man. The beef is surely to get spicy if Dorsey does something like ban Trump from the network.

The hill that Avril Lavigne wants to die on? Fighting back against those who bully Nickelback fans on the internet, including Mark Zuckerberg. In the announcement video of the new A.I. home assistant Jarvis, Zuckerberg took a cheap shot at Nickelback. The Facebook founder asks Jarvis to play some good tunes of the band, but the home assistant refuses to since they don’t have any. This struck a cord with the ex-wife of Nickelback frontman, accusing Zuckerberg of “promoting bullying.” Sure, that might be the case when he’s letting fake news slide, but this Nickelback situation might not be the best example.

1. Smash Mouth vs. the Oakland A’s

Smash Mouth, with nothing better to do on a Friday night at 11:09 p.m., decided to weigh in on some Oakland, California sports. Unhappy with being called a “joke,” the social media manager behind the Oakland Athletics Twitter account ripped into Smash Mouth. It went back and forth, escalating to a point where the once-prominent band was completely roasted by the team. Their clapbacks were so scorching that they had to be deleted and apologized for, but thankfully they’ve been preserved in screenshots. It might not have been “All Star” behavior, but it did land the feud as the dumbest (and arguably saddest) beef in our eyes.