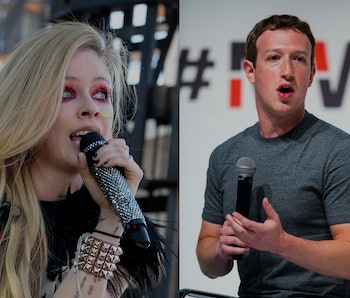 It’s safe to say it’s been a year of surprises, but it seems 2016 has one more in store. Avril Lavigne, famous for her early-2000s hit “Sk8er Boi,” jumped to the forefront of Twitter timelines everywhere on Friday, slamming Mark Zuckerberg for bullying her estranged husband Chad Kroeger’s band Nickleback in his A.I. demonstration video. With just over a week to go until the new year, 2016 has managed to squeeze out one more sentence that nobody expected to write before now.

The furore focuses on Zuckerberg’s new A.I. home assistant, Jarvis. At the start of this year, the Facebook CEO set himself the challenge of creating an interactive chatbot that could control his smart home. He’s documented his progress on a blog throughout the year, and the project has come together nicely. To celebrate, he posted up a summary of the challenges, pitfalls, and successes, which makes for a great read if you enjoy finding out the nitty gritty, but it doesn’t really capture the imagination.

So, Zuckerberg did a second post that showed a video of how Jarvis works in practice. Voiced by Morgan Freeman and Arnold Schwarzenegger, the video isn’t an exact depiction of Jarvis, but it’s a fun little explanation of what the A.I. does. It teaches Mandarin to his baby, switches the lights on and off, and even plays music.

At one point, Zuckerberg asks Jarvis to play some good music by Nickelback. Jarvis refuses, because Nickelback doesn’t have any good music. A silly joke, but one Lavigne really didn’t take too kindly to:

At the time of writing, neither Zuckerberg nor Nickelback have responded. Twitter fans have been weighing in on Lavigne’s tweet, noting the rather unusual hashtag at the end:

Others thought it was a message that needed to spread:

As A.I. assistants become more commonplace, it probably won’t be the first time a celebrity criticizes a computer for making a bad joke. Roll on next year.