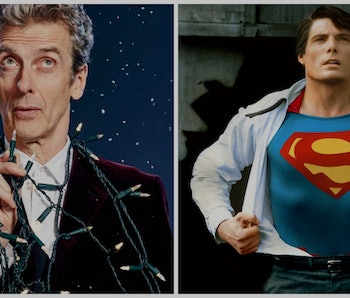 After a long absence, Doctor Who finally rematerialized on Christmas Day in the special episode “The Return of Doctor Mysterio.” While this Time Lord outing was probably an uncommon adventure for fans who strictly love Doctor Who, it was a very familar story for crossover fans of comic book superheroes. In several promotional interviews for “The Return of Doctor Mysterio,” incumbent Doctor Peter Capaldi repeatedly referenced Christopher Reeve’s performance as Superman and said the special “has caught the feeling of that kind of superhero movie.”

The episode certainly delivered all of that: After meeting a young boy named Grant on Christmas day, the Doctor accidentally turns the boy into a superhero. And from there, the myriad references to comic book superheroes started to fly. Here’s your guide to all the superhero and comic book references, from DC and Marvel, and even a few deeper cuts, hiding inside Doctor Who’s “The Return of Doctor Mysterio.”

The first scenes of “The Return of Doctor Mysterio” show a comic book version of events which are yet to occur in the episode, specifically the Doctor’s showdown with the gun-wielding Dr. Sim.

Name-checking the creators of Superman

Very early, just after Harmony Shoal’s presentation for the press, Mr. Brock says any questions can be directed toward either “Ms. Shuster or Ms. Siegel.” This is a reference to Joe Shuster and Jerry Siegel, the original creators of Superman.

Grant’s Origins Reference Shazam and others …

When the Doctor accidentally gives Grant a gemstone, which Grant swallows, the Doctor says the gemstone is giving him “what he always wanted.” The first Captain Marvel (later known as “Shazam”) was actually a child named Billy Batson who can become a superhero. The metafictional influence in “The Return of Doctor Mysterio” may also be a reference to the Mark Millar comic series Superior in which a young boy literally becomes a popular fictional flying hero.

To demonstrate to the young Grant that Superman and Clark Kent are one in the same, the Doctor draws classes on Superman. Lois Lane does this same thing in 1980’s Superman II.

The top of the building in which the evil Harmony Shoal has a globe very reminiscent of the globe on top the base of the fictional newspaper: the Daily Planet. In all of Superman lore, the Daily Planet is the newspaper where Lois Lane and Clark Kent both work.

Speaking of Spider-Man, Uncle Ben used this words to Peter Parker, and it became the web-slinger’s mantra. The Doctor uses these words knowingly on Grant to chide him for leaving a baby unattended.

The Ghost’s Date With Lucy Fletcher

Lucy Fletcher’s journalistic “date” with the Ghost directly parallels Lois Lane’s roof-top interview/date with Superman from the 1978 film. In Superman, Lois calls her article “I Spent the Night With Superman.”

“I hope this unpleasant experience …”

When the Ghost rescues Lucy, he says, “I hope this unpleasant experience doesn’t put you off a career in journalism.” This is a wonky reference to Christopher Reeve’s Superman saying in the 1978 film, “Well, I certainly hope this little incident hasn’t put you off flying, miss. Statistically speaking, it’s still the safest way to travel.”

In the 1960’s Batman TV series, Adam West’s caped-crusader would often give very heavy-handed PSA-style speeches to Robin, and seemingly, the audience. This is referenced in “Doctor Mysterio” when the Ghost tells a reporter that every good citizen should “get a smoke detector.”

When Grant first meets the Doctor he asks him “which” Doctor he is, implying there are several superheroes (and villains) with the prefix “Doctor.” The Doctor replies that he is the “…main one. I started it. They’re all based on me.” This mostly a reference to the idea that Peter Capaldi recently mentioned that the Doctor would believe that Doctor Strange “stole my look,” but also a long-standing concept of Steven Moffat’s. Before Steven Moffat was the showrunner of Doctor Who, he postulated the fan theory about the Doctor’s name saying in 1995 “…perhaps our earthly use of the word “doctor” meaning healer or wise man is direct result of the Doctor’s multiple interventions in our history as a healer and wise man. In other words, we got it from him.”

“Doctor Mysterio,” meanwhile, is the the actual title of Doctor Who in Mexico, a fact which delights Peter Capaldi.

Outside of all the superhero send-ups, this episode also contained some easter egg references to Doctor Who’s own ongoing mythology.

At the beginning of the episode, the Doctor is attempting to fix certain time distortions in New York City. He admits that these were mostly his fault. This references the Doctor visiting New York in “Daleks in Manhattan” and, more infamously, “The Angels Take Manhattan,” in which audiences were lead to believe the Doctor couldn’t actually land in NYC anymore.

The Doctor “tips off” UNIT at the end of the episode to help round-up all the Harmony Shoal aliens. One UNIT solider mentions Osgood. But, UNIT’s involvement with New York City goes back to “The Stolen Earth,” when it was depicted that Martha Jones worked for UNIT in Manhattan.

A sonic frequency only Grant can hear …

Toward the end, the Doctor uses a frequency of his sonic screwdriver that only Grant can hear. He did something similar when communicating with a young Davros in “The Magician’s Apprentice.”

Pockets … bigger on the outside

The Doctor pulls a glass of water out of his pocket. The 10th and 11th Doctors both were depicted having pockets that, like the TARDIS, are bigger on the inside.

Brains, with minds of their own!

The invasion of sentient alien brains in this episode vaguely references the 4th Doctor adventure “The Brain of Morbius.” Plus, the villanous brain-swapping Harmony Shoal in this episode appears to be the same organization from last year’s Christmas special, only at that point (the year 5343) the organization is/was calling itself “The Shoal of the Winter Harmony.”

“I get an invasion.”

The Doctor mentions he always gets a cold on Christmas, or “an invasion.” This is a reference of course, generally to the Doctor fighting aliens on Christmas Day, but specifically, to the first Christmas special, “The Christmas Invasion.”

The last appearance of the Doctor, prior to “The Return of Doctor Mysterio,” was “The Husbands of River Song.” There, it was revealed that the Doctor and River Song finally had their final “date” near the “singing towers of Darillium,” where one night lasts for 24 years.