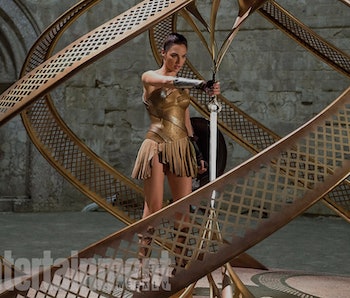 DC’s Wonder Woman film is beginning to take real shape, with the badass moments seen in the film’s trailer becoming more and more fleshed out. One (presumably) early moment in the film will be Diana leaving Themyscira, but not without first taking some weapons, including the sword “God Killer”.

In the Wonder Woman trailer, there is a moment early on where Diana sneaks into what looks like a shrine on Themyscira to take the sword she would later be seen wielding in battle. Entertainment Weekly now reveals that the scene plays out exactly as it looks, with Diana stealing the sword in order to use it in man’s world.

“This is her moment. She’s heard all the terrible things about mans land. But she’s also heard that mankind is in need and under duress. This is her great moment to make the decision to be the one to try and save them,” explained director Patty Jenkins.

The ‘God Killer’ sword is a divine weapon forged by the deity Hephaestus, and originally given to Deathstroke in the comics so he could assassinate the Greek Titan Lapetus. As a magical item, the ‘God Killer’ is able to shapeshift into different blade forms, and can send out a powerful shock blast.

More like this
Entertainment
6.14.2022 4:50 PM
A Joker 2 musical would actually be great — here’s why
By Dais Johnston
Entertainment
6.16.2022 11:30 AM
30 years ago, Tim Burton made the sexiest and most sinister superhero movie
By Mónica Marie Zorrilla
Culture
6.20.2022 12:00 PM
25 years ago, the worst Batman movie ruined the franchise — and inspired a modern trend
By Dais Johnston
Related Tags
Share: