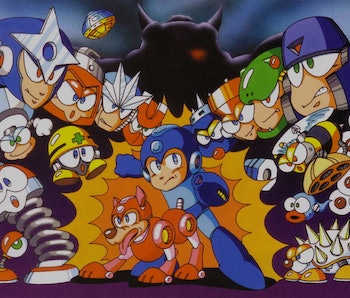 Mega Man, everyone’s favorite (or maybe second-favorite) blue video game hero, is coming to your smartphone. Capcom announced on Monday that the first six Mega Man games would be available on iOS and Android in January — “just missing the Blue Bomber’s birthday by a few weeks,” according to a press release.

The port marks the first time that the original 8-bit Mega Man games will be playable on smartphones and tablets. All six games will add the word “Mobile” to their titles, and Capcom says each game has been “optimized for the mobile devices with adjustments to game speed.”

Capcom tweeted out a link to a website where Mega Man fans can pre-register for the games, signing up for special offers and early notification of any hard release date.

The announcement comes just a few days after Nintendo’s flagship character, Mario, ran onto iOS. That, of course, was a new game rather than a port of an old classic, but it does seem like console video game heroes of old are making the jump to the iTunes store — and from there, they’re headed to your pocket.