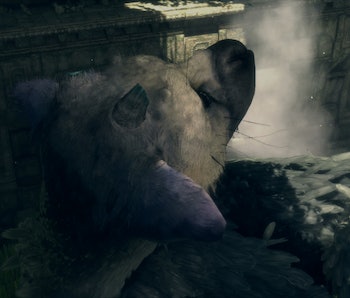 The Last Guardian is one of the more interesting video games of 2016 thanks to the way it focuses so heavily on the bond between Trico (the gigantic, adorable animal) and the young boy protagonist. The relationship between the two is phenomenally represented through the gameplay mechanics, but it can prove frustrating thanks to the way Team Ico weaved Trico’s behavior into the various encounters and puzzles. Much like an actual puppy, Trico is regularly unsure of his actions, which can lead to seemingly impossible sections of the game. Even though it may not be the ideal strategy for every gamer out there, the key with Trico is patience.

As I like to view it, Trico is just a simple man-eating beast looking for a little help. Like the player, he’s worried about concepts and creatures he doesn’t quite understand until they make their intentions known. He also has a favorite dish he enjoys eating, which just happens to be small barrels filled with magic food that seem to bring him some form of comfort when things get bad.

While controlling his new pal, the young boy, it’s your job to figure out how each of Trico’s favorite things and usual behaviors can be used to progress through sticky situations. In most cases, this will mean some creative thinking on your part, whether it’s placing food barrels to lure Trico down into an unsettling area or taking advantage of your shield to direct lightning from his tail to deal with obstacles. You’ve just got to remember that Trico is almost always an important part of the puzzles you’ll be working through, and you’re always going to need him around to reach the next step of your journey.

For the first few hours of The Last Guardian, Trico is going to be one of the most frustrating NPCs you’ve ever worked with in a video game. He’ll consistently walk in the wrong direction, get unnerved by certain areas, and work himself up into a tantrum after encounters with enemies. No matter the cause, you’ll want to pay attention to his eyes, grunts, and whines, each of which give you a hint into what he needs so that you can progress forward. Sometimes it’s as simple as a pat on the head, and other times it’s a trail of food barrels that lead him into the next room.

Once your bond with Trico is strong enough, however, you’ll be able to issue direct commands to him by holding down R1 and pressing specific buttons on the controller:

R1+ X allows you to tell him to sit down or scold him.

R1+ O allows you to have him stand up or praise his actions.

R1+ Triangle allows you to have him jump or stomp down on enemies.

R1+ Square allows you to have him attack or swipe in front of you.

Holding down R1 and aiming in a specific direction allows you to roughly steer him.

Whenever Trico is uneasy you won’t be able to issue him direct commands until you calm him down by climbing up on his back and petting him until he’s back to normal. While doing this, it’s important to move slowly and constantly say his name to make sure he doesnt fling you off, which can easily mean your doom if the two of you are next to a cliff.

Essentially, the more you play The Last Guardian, the more apparent Trico’s behavior will start to become. You’ll start to pick up on what makes him upset and how to best calm him down, you’ll start to realize how to best handle obstacles in your way, and, most importantly, you’ll start to make one of the best digital friendships the games industry has to offer this year. Just be patient and enjoy the journey to becoming best buds.