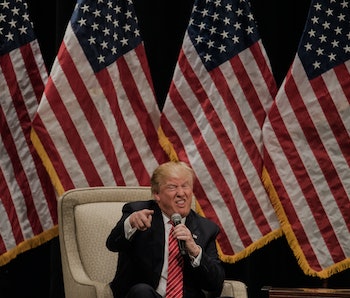 Faithless electors couldn’t — or perhaps it’s more accurate to say wouldn’t — stop Donald Trump from officially becoming the official president-elect when the Electoral College voted on Monday. Still, even though they didn’t come close to changing the outcome of the election, 2016 was notable because it saw the most-ever electors who voted for someone other than their party’s nominee. Seven people broke ranks with their party and state. Here’s who they voted for.

Some liberals are doubtless surprised that it was Hillary Clinton, not Trump, who lost the most electoral votes due to faithless electors. It’s not all that shocking, though. Four electors in Washington state cast their votes for other candidates. Three voted for Colin Powell. One, Robert Satiacum Jr., voted for Native American activist Faith Spotted Eagle. Satiacum stated that he would not be voting for Clinton due to her environmental policies. An elector in Hawaii voted for Senator Bernie Sanders. The votes against Clinton are also votes against the Electoral College as an institution, so the protest votes still send a message.

Three more electors tried to cast votes for a candidate other than Clinton as well, though none were successful. An elector in Maine tried to cast his vote for Sanders, but voted for Clinton during the second round of votes after his conduct was ruled out of order. Electors in Colorado and Minnesota also tried to vote for someone else, but both were replaced by faithful electors in adherence with state law.

Only two electors who had been pledged to Trump went rogue, and both of them were from Texas. One voted for former Texas congressman and Libertarian hero Ron Paul, while another voted for 2016 presidential candidate and current Ohio Governor John Kasich.