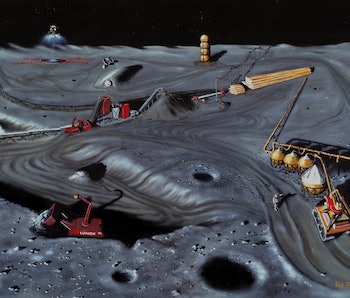 The Japanese Aerospace Exploration Agency (JAXA) announced Friday that it will begin working with a private lunar robotics exploration company to mine for resources on the moon. The Tokyo-based ispace Inc. should help facilitate Japan’s (somewhat late) entry into the rapidly growing and potentially lucrative field of space mining.

Space mining sounds like a fun but made-up occupation set in the dystopian future, sort of like space archaeologist (real) or space cowboy (less real). But this is far from so — space mining is quickly becoming a ring into which multiple nations and space entities are tossing their respective hats. Luxembourg, for instance, has a head start on Japan here, and the United States already introduced “finders-keepers” legislation for resources recovered from space mining more than a year ago.

Space-resource development is garnering attention around the world now,” ispace CEO Takeshi Hakamada told The Wall Street Journal. “It’s very important that we work to commercialize and create rules while we still have a technological advantage globally.”

If you thought the moon was a barren place bereft of any resources international space agencies would actually be interested in, you’re still sort of right. But since the moon has water it has, by extension, oxygen and hydrogen we could convert to fuel to help reduce costs of future missions. One of the biggest implications from the U.S.’s own SPACE Act in 2015 2015 was the ability to mine water — if we can pick up rocket fuel in space when missions run low rather than having to return home, that’s an obvious milestone to advance the feasibility of deep-space travel. There are potentially billions of tons of water below the moon’s surface, and NASA as well as a host of private operations are busying themselves with the scientific and legal processes of extracting it. The moon may be boring, according to some, or at least not nearly as interesting as Mars, but it has potential as a kind of spacial gas station; Japan is merely the latest in a string of countries to act on that.