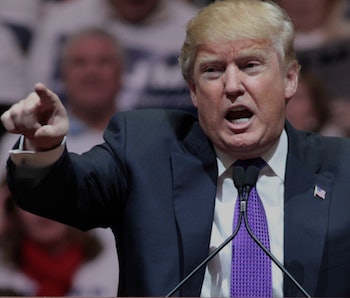 Donald Trump thinks many things are disgusting. His list of disgusting things includes, but is not limited to, windmills, the media, and Anthony Weiner. It’s easy to assume that “disgusting” is just another word in Trump’s arsenal of insults. But considering his use of “disgusting” through the lens of new psychological research actually presents an interesting look at what he considers to be immoral.

Spoiler: What President-elect Trump considers immoral are the things that he thinks pose a danger to him.

A recent study published in Psychological Science explains that people appraise how “disgusting” someone is by their lack of morals. The interpretation of a person’s character, more so than their actions, determines the difference between thinking something is disgusting or just bad. The worse someone’s morals are determined to be, the more disgusting they are considered.

“We wanted to know why moral transgressions can be disgusting even when they don’t involve the kinds of things that typically disgust us, like body products, insects, and rotting foods,” study co-author Hanah Chapman, Ph.D., in a statement. “We found that what drives moral disgust seems to be the character of the transgressor — who they are more so than what they do.”

To come to this conclusion, Chapman and her team had 87 subjects read and evaluate two scenarios. In the first, a man discovers his long-term girlfriend has cheated on him, and he beats her. In the second, he makes the same discovery but instead beats her cat. The participants were asked to rate a variety of factors, such as how immoral they found the man’s actions to be and their relative levels of anger and disgust.

In general, the results revealed that people thought that hurting the cat was less morally wrong than hurting the girlfriend — but that the moral character of the man who beat the cat was worst.

In a follow-up study, people read scenarios about people who either wanted to hurt someone or people who actually hurt someone. When harm was actually done, people responded with anger. When there was an intention to harm but no actual harm, the predominant reaction was disgust.

The combined results of these studies suggests to the researchers that when we judge someone a “bad person” we feel disgust, and when we see “bad actions” we feel anger.

If this line of thinking is correct, then Trump believes that every disgusting thing is, at the core of its nature, morally bad.

The feeling of constant disgust is considered by psychologists to be an act of self-protection. Disgust is unique among emotions in that it has no obvious pathology — whereas anger and fear do — and what one feels they need protection from can be as wide-ranging as a virus or a person. But researchers from Rice University have found that frequent disgust can also lead to selfish behavior.

“As an emotion, disgust is designed as a protection,” study author Vikas Mittal, Ph.D., said in a statement. “The instinct is to protect oneself. People become focused on the ‘self’ and they’re less likely to think about other people.”

Does Trump think “disgusting” windmills, media, and Anthony Weiner are out to get him, thereby leading him to react in a selfish and protective way? The researchers note that their “findings were complex and warrant further investigation,” so it’s hard to say for certain until more work is done. In the meantime, we can just look at the tweets.