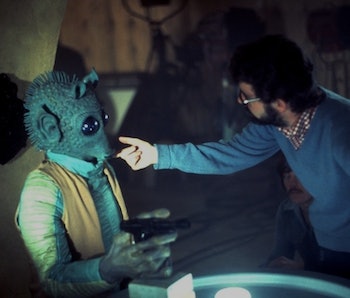 In returning to the time of the original Star Wars trilogy, Gareth Edwards’ new spinoff film Rogue One places a heavy emphasis on practical make-up and animatronic character effects. Of course, because it’s 2016, there are by necessity lot of computer generated characters, including are plenty of animated aliens, robots and even digital human doubles in the film.

With that mix of real and digital creature make-up effects in mind, here’s a look back at how some of the most memorable Star Wars characters with practical and CG prosthetics and some that even straddled both techniques as the films have been tweaked over the years.

39 years later, we’re all still debating whether Greedo shot first, but what might be most interesting about this bounty hunter who accosts Han Solo in the Mos Eisley Cantina in A New Hope is that he was originally only intended to be a background character. As such, creature supervisor Stuart Freeborn initially designed only a simple rubber mask for the actor to wear.

Later, the face-off between Greedo and Solo was actually reshot after the alien was given extra mechanisms in its mask in order to move the ears and mouth — and so allow him to talk. Interestingly, Greedo was also slightly based on a character, the ‘Pea pod alien’, that Freeborn had already made for a television commercial.

Another of Freeborn’s creations was Yoda, whose face was famously modeled after the faces of the effects designer and that of Albert Einstein. Starting with a reference drawing, Freeborn firstly made a rough puppet to see what kind of facial movements could be achieved. Later, the 900-year-old creature came to life via a more detailed sculpt.

On set, the Yoda puppet was operated by Muppets pioneer Frank Oz, who also voiced the Jedi knight, by positioning himself below the set. Yoda remained a practical creation through The Empire Strikes Back, Return of the Jedi, and the theatrical release of The Phantom Menace (aside from one brief moment at the end). But by Attack of the Clones, visual effects studio ILM was confident enough to render Yoda as a CG creation that could demonstrate his true fighting abilities. To try and keep the change as inconspicuous as possible, they recreated the smallest details of the puppet, such as even the distinctive ear wobble that was part of Oz having his hand inside, were translated to the digital model.

Mon Calamari Rebel Alliance leader Admiral Ackbar, who appears in Return of the Jedi, saw puppeteering and makeup effects reach new heights in the Original Trilogy. Depending on how the character was filmed, Ackbar was realized with either a half-body puppet or a simpler slip-on mask.

For the closer to camera shots, puppeteer Tim Rose sat in a position so that he was inside Ackbar’s chest, but would operate the head like a hand puppet, specifically moving the mouth. A different puppeteer took control of the eye movements via separate cables.

Some equally ingenious puppeteering took place for another Return of the Jedi character, Sy Snootles, seen as a member of the Max Rebo band in Jabba’s place. Here, puppeteers Mike Quinn and Tim Rose devised a marionette system for operating the skinny Snootles between them on a scaffolding set-up.

However, for the Special Edition rerelease of the film in 1997, the character was re-imagined in CG by ILM during a whole new music number with other CG aliens (although some of the original puppet shots remain). These CG shots, part of many changes director George Lucas made to the original releases, were still in the relatively early days of fully digital characters — only the year before ILM had delivered the digital dragon Dragonheart and the aliens of Mars Attacks!.

ILM’s vast experience in creating digital characters culminated in the creation of Jar Jar Binks for The Phantom Menace. Ultimately, the Gungan was a combination of a performance by actor Ahmed Best — who also provided motion capture reference — and then the work of scores of animators. Best performed scenes on set in a partial Jar Jar suit and headpiece, which helped with eye lines for other actors and also provided lighting reference for the visual effects team when they put in their digital character.

During pre-production, ILM actually carried out a side-by-side test when they were still considering only replacing the head of Best wearing a Jar Jar suit. Binks may not be remembered as fondly as the filmmakers would like, but at the time his creation was an enormous achievement in characters that heretofore would have had to have been mostly physical make-up and animatronics.

Fodesinbeed who? Although not a major character in the Star Wars saga, Fodesinbeed Annodue (or Fode and Beed) has an intriguing creation story. The pod race announcer seen in The Phantom Menace was performed by comedians Greg Proops and Scott Capurro in a conjoined role. They initially were made up with prosthetics and blue-screened suits to film the scenes, the idea being that their heads would be eventually placed on a CG body.

But they were reportedly surprised to discover when the film was released that Fodesinbeed Annodue ultimately became a fully CG character. Again, this was a period right at the nexus of what could be achieved with practical versus digital effects, and digital means provided the most realism and flexibility for the announcer.

Jump ahead to The Force Awakens, and a similar live action/CG scenario took place for the Jakku scrapyard boss Unkar Plutt. Performed on set by actor Simon Pegg in costume and makeup prosthetics created by creature effects supervisor Neal Scanlan, Plutt’s head and neck were then mostly crafted digitally by ILM.

It allowed the filmmakers to make the character even more grotesque — a key plot point — and more emotive. And it was another fine example of mixing practical and CG approaches to find the one that works best for the film.