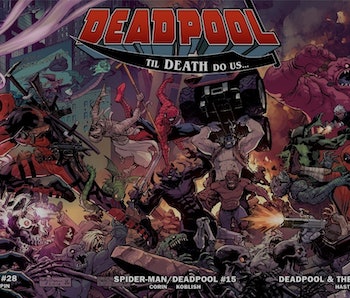 Did Deadpool get a prenup? Because in a new Marvel mini-series arriving in March, Deadpool and his wife Queen Shiklah, ruler of Monster Metropolis underneath Manhattan, will be at fighting odds when Shiklah rises to the surface in the six-part comic Deadpool: Til Death Do Us. The book, which releases March 2017, will run through Deadpool, Spider-Man/Deadpool, and Deadpool and the Mercs for Money.

The book intends to present a rare look at Deadpool who is forced to choose between his wife and the rest of the Earth that he swears (quite profanely) to protect.

“Humans and monsters are not great neighbors,” explains Gerry Duggan, who will write the Deadpool issues on the events that set up the book. “At the end of a long series of incidents of poor behavior on both sides, Shiklah decides she’s had enough. Even though she is coming to terms with Deadpool not being a great husband, she is also beholden to her people, so this is very much an act of preservation, in her mind, for her kingdom. It will also force Deadpool to make some choices. Are you with the soft, pink surface dwellers or are you with your wife and her citizens back down below?”

Duggan admits that the book comes from a rather personal place. After 17 years of marriage, his parents divorced for another decade and change until they found themselves together again. “I’m intimately aware of the inner dynamics of this relationship,” says Duggan, “All these emotions run super hot. They do, the two character[s] do love each other, but they also are being pulled in big opposite directions.”

Til Death Do Us will have multiple writers taking on different parts of the issue. Duggan will helm the main Deadpool series while Joshua Corin will write the Spider-Man/Deadpool issues of the crossover. Gwenpool writer Christopher Hastings will take on Deadpool and the Mercs for Money.

Deadpool: Til Death Do Us will be released March 2017.