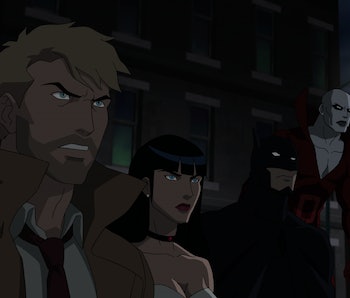 The Dark Knight of DC, Batman, is almost always the grumpiest one in the room. But when he’s out-darked by a newly formed goth squad in Justice League Dark, Batman’s only sensible reaction to ghosts and demons is to lighten up.

On DC’s YouTube channel, Jason O’Mara (Batman) and Matt Ryan (Constantine, reprising his acclaimed TV role) discuss the new animated movie Justice League Dark, an adaptation of Peter Milligan’s 2011 comic where the supernatural anti-heroes of the DC Universe join together to save the world.

Unlike the Justice League Dark comics, Batman plays a significant role to help cement this alternate squadron as a legit force in the DCU. However, the grounded and gritty Batman doesn’t usually fight the supernatural, meaning for the first time in a long time, Bruce Wayne is out of his league.

“What’s great about Batman in Justice League Dark is usually he’s like the straight man, but here he’s got a chance to be funny,” explains O’Mara. “When you’re that dark there’s only one way to go. It’s really enjoyable to see Batman kind of … let his cowl down, and have some fun with it, because he thinks it’s all nonsense. But he’s smart enough to know he’s going to need help with this unsolvable mystery.”

That’s where Constantine comes in: A London con artist who deals exclusively in magic, he’s the one Batman calls to form a unified team to stave off extinction. Sort of like Batman himself, Constantine takes the role of the cool renegade that is just a little bit reluctant to be here.

In a separate interview, Matt Ryan says the banter between Batman and Constantine is one of the most fun things in the film. “They’re both kinda reluctantly involved with each other,” he says, “The relationship they have is fantastic. By the end they kind of realize they’re both actually okay guys.”

Justice League Dark will be released January 24, 2017 on Digital HD and February 7 on Blu-ray and DVD.