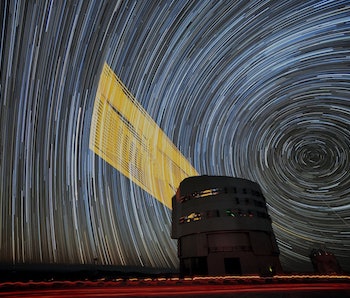 It’s a hell of a lot more expensive to stick a telescope in orbit than it is to build one down here on Earth, so space agencies tend to build more of them. But there’s one challenge all these terrestrial telescopes have to deal with: the atmosphere. All that air distorts light coming in from stars and galaxies. The last thing you want as an astronomer is a bunch of twinkling stars. That’s where lasers come in.

Photographer Fred Kamphues captured the Very Large Telescope’s laser-guided adaptive optics system earlier this year, complete with mesmerizing star trails, in a long exposure image. The European Southern Observatory (ESO) may not have been creative with the Chilean telescope’s name, but they are creative with the telescope’s mirror. It’s deformable, and scientists use computers and lasers to precisely adapt its shape to compensate for atmospheric distortion and get the sharpest images possible.

But that mirror, and the computers shaping it, needs a reference point that’s close to the object scientists are trying to observe. So they shoot four powerful lasers into the sky and use those four artificial stars to help focus the mirror. The 22 watt lasers excite sodium atoms in the upper atmosphere, about 56 miles above the Earth’s surface, and the computer measures the distortion from the atmosphere to make adjustments for real stars. As they systematically move through the night sky, the lasers look a little like a message for aliens, but it’s just scientists studying the cosmos.