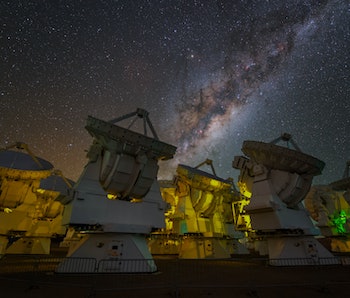 The Atacama Desert in northern Chile is a cold, arid frontier known for its 350 cloudless days per year. It’s the ideal environment from which the European Southern Observatory, an intergovernmental astronomy organization based in Germany, operates its three observing sites. In 2014, the ESO sent its top astrophotographers to the isolated region to capture the splendor of the night sky — and the results, now on YouTube, are ultra high-def glory.

A recent episode of the ESOcast web series followed the team’s travels to the Paranal, La Silla, and ALMA observatories. They kicked it off with Paranal, the site of the aptly named Very Large Telescope. The VLT takes in observations with visible and infrared light and spits imagery out at the milliarcsecond level. That’s pretty cool — but the views above the machinery are pretty damn spectacular in their own right.

Because the photographers were working with some of the darkest night skies on Earth, they were able to get crystal clear views of the stars above.

From there, the team moved on to the Atacama Large Millimeter Array, known as ALMA. This observatory is at the foothills of the Andes Mountains, about 5,000 meters above sea level. Because of the extremely high altitude, human operations at the site are limited.

The elements, says a breathless narrator in the episode, made for the “ultimate low-oxygen experience.”

For their final stop, they went south to La Silla. About 300 miles from Santiago, this site operates two major telescopes — the 3.6m telescope and the New Technology Telescope.

Far from sources of light pollution, the La Silla Observatory was the first ESO site in Chile.

ESO says its intent for commissioning these time-lapse shots was so people around the world could enjoy the beauty of space. If a trip to remote Chile is in your future, don’t settle for sweet video — tourists are actually allowed to go on public tours of the facilities. For the rest of us, HD isn’t a bad consolation prize.