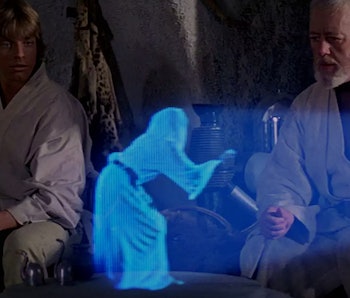 Pretty soon, Princess Leia might not be the only one who can send messages by hologram.

Today, a multinational team of researchers published a paper in the journal Nature showing that they can use holograms in laser beams to transmit massive amounts of information per second. It sounds revolutionary, but there’s a problem: there’s an argument that it’ll never work outside a lab.

But we do need a solution to our ever-growing hunger for data, and thanks to the Internet of Things, our old bandwidth system is getting seriously crunched. Internet bandwidth is like a highway — as more people decide to go for a drive, the more congested and the slower the traffic goes. And now research into building more bandwidth has turned to a futuristic solution – holograms.

The holograms are based on a property of light called orbital angular momentum, or how light twists as it travels. Because of how the twisting occurs, different twists can be controlled to provide access to a large number of bandwidth channels. Abderrahmen Trichili and his team say that use of orbital angular momentum has the potential to transmit petabits per second — a thousand times more information than a terabit per second.

To make the holograms, Trichili and his team in Tunisia and South Africa divided a laser into 105 different modes. These modes are alterations in the shape of the beam that are encoded with different information, in this case, a high-resolution image of a Rubik’s cube. The different modes that make up the image are then layered together into a single holographic stream. When the hologram reaches a receiver, the different modes are separated and hit a camera sensor that displays the image that was transmitted.

However, this has yet to be proven outside the lab, and Trichili’s team points out that to use this technology over long distances, adaptive optics would be needed to reduce disruption of the beams.

Disruption is one of the big problems with using holograms to send information. They can easily be warped by turbulence in the signal, causing the information they’re transmitting to degrade. The turbulence is often caused by interactions between the elements of the lasers themselves. We are reliant on lasers to send holograms, because we cannot build fiber-optic cable perfectly enough to maintain the twists in the light without distortion.

Because of the distortion problem in optical angular momentum, a group of researchers from China and the United States, led by Ningbo Zhao, believe that holograms don’t have the potential to transmit information outside the lab. In their research, published in Nature Photonics in November, they found that distortion occurs between the holographic lasers used to send the information, caused more degradation of the information than other potential methods of bandwidth creation. According to Zhao’s team, this degradation prevents optical angular momentum from increasing bandwidth capacity.

But the paper from Trichili’s team directly tackles this finding by Zhao. The work done by Zhao neglects to use one of the two elements of optical angular momentum to transmit information, writes Trichili’s team. Using both, and by using higher quality beams, Trichili’s team says they are able to reduce the interference between the lasers and increase bandwidth capacity by several orders of magnitude.

It is still unclear whether Zhao or Trichili is right about using holograms to send information, so it might be a while before you can send your friends funny cat videos via hologram.