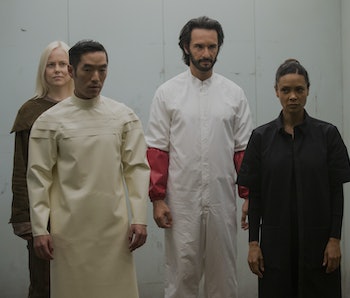 At the end of the first season of HBO’s newest hit, the robots of Westworld in the present-day timeline gained a sense of purpose if they hadn’t also gained their sentience, and in the Season 1 finale they were also ready to break out into the real world. But it looks like Season 2 will go back in time. Viewers should look forward to finding out more about what it’s like to be a guest of the park when the series returns in 2018.

According to Westworld co-creators Jonathan Nolan and Lisa Joy, all or most of the logistical questions about the park will be addressed in Season 2. In an interview with TVLine, Nolan said they’ll focus on the particulars of being a guest as well, before the robots decided to start killing everyone:

We talked a lot about how the experience would feel for a contemporary guest going into the park. We laid out a lot of that logic in the writers’ room … it didn’t feel appropriate to spend too much time illuminating how unreal this place is, because the hosts believe in it so much up until that horrifying moment when they realize that it’s an artificial world. So we didn’t get bogged down in it.

[We’ll] spend a little bit more time next season shining a light on those aspects of the park — what does it feel like to come to it as a guest? — just a little bit before the mayhem starts.

So expect a few audience surrogates next season to bring us through the process of what it must be like to go from your real life into a completely constructed western reality. Also, here’s hoping this exploration of how it would feel also involves revealing the exact location of where Westworld actually is.

It’s possible that the supposed continent-sized park could be an actual place on Earth, but some of the wackier fan theories think that it could be somewhere in space. Knowing Nolan, every little detail will count, so it will give all the fans even more to obsess over.