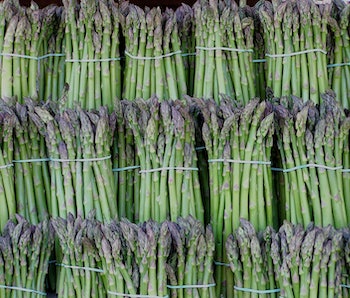 At a recent science conference in the Swedish countryside, the conversation among several scientists turned to how their pee smelled after eating spring asparagus. Some, after eating the green stems, didn’t smell anything their urine, while others found that, in the words of Benjamin Franklin, the asparagus had given their “urine a disagreeable odor.”

Being curious scientists, they decided to figure out what caused this difference. In a paper published Tuesday in the Christmas edition of the BMJ (an issue historically known to feature whimsical, but factual, academic papers), the international team of researchers explain that a genetic variation near the olfactory receptor genes is associated with the ability to smell the metabolites of asparagus in urine. They also conclude that the majority of people don’t smell something funky in their pee after eating asparagus.

There’s no question that asparagus does make urine smell — when someone consumes it, the vegetable’s metabolites, methanethiol and S-methyl thioesters create a distinctive stink. But it’s the mystery of why some people cannot smell this change that drove the study.

To investigate, the researchers examined the genetic data of 6,909 men and women of European-American descent. Subjects were asked, simply, whether or not they noticed a “strong characteristic odor in [their] urine.” The people who could not smell anything were said to have “asparagus anosmia.” Breaking down this population, the researchers report that 40 percent did smell an odor, and 60 percent did not.

When they analyzed the genetic variants of the people who did smell a difference, they found that they had comparatively different sets of genetic variations within the multiple olfactory receptor genes — the genes that give people the ability to detect smells.

Further analysis revealed that people who could not smell a difference had three independent genetic markers (unique sequences that can be easily identified on a gene). This led the researchers to believe that the inability to smell asparagus pee is inherited.

When they analyzed their data by sex, the researchers found that 58 percent of men and about 62 percent of women with their sample has asparagus anosmia. Overall, more women reported that they couldn’t smell asparagus in urine. Because the trait is rooted in genetic variations that aren’t located on the sex chromosomes, the researchers aren’t sure why that difference exists. They theorize that this difference could just exist because women urinate in a position that makes it easier to not smell their pee.

The scientists do admit that there are some limitations to their research: Because data collection relied on the participants’ ability to report odor, the results may not be completely objective. Additionally, because the sample was only made up of people of European descent, the researchers can’t say whether the genetic variants would be the same for people of other ethnicities.

Regardless, even if you do think your pee smells bad after eating asparagus, you should probably keep eating it. Asparagus is a rich source of many vitamins and is believed to reduce the risk of cardiovascular diseases, cognitive impairment, and cancer. A smelly toilet is small price to pay.

More like this
Science
5.12.2022 6:00 PM
Surprise! Biologists find that plants can grow in Moondust returned by Apollo
By Kiona Smith
Science
5.16.2022 10:00 AM
Pig-human heart transplants still have a long way to go
By Andrew Fenton, The Conversation and Françoise Baylis
Science
5.15.2022 7:00 PM
200 years ago, this terror of the Amazon inspired the world’s first batteries
By Timothy J. Jorgensen and The Conversation
Related Tags
Share: