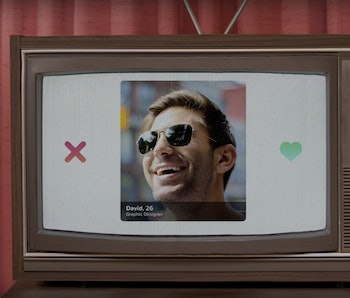 With the upcoming holidays, singles everywhere will be barraged with nosy family members asking if they’re dating anyone. But with Tinder’s latest integration with Apple TV, it’ll be easier than ever for lonely hearts to show their aunts and uncles the awful reality of modern day dating by pulling up the app on the big screen. The new feature just proves dating apps have started to become passé, and Tinder is going full camp, leaning into how it’s become a game-ified social activity of swiping on potential suitors.

In a blog post on Tuesday, Tinder unveiled the new compatibility with Apple TV. Users can download Tinder on the App Store for Apple TV and use a trackpad for the usual swiping. The company triumphs this as the “latest innovation in quality fun.” And that’s the thing — although Tinder started off as a dating app, many people have realized that there’s some real fun in turning the service into a game of sorts. People time after time have Tinder experiments, whether it’s responding only with Drake lyrics or putting their mother in charge of swiping.

There’s an entire Tinder culture where people will “swipe for their friends” or play backseat matchmaker by commenting on various suitors profiles. Although giving guidance to buddies on dating prospects isn’t a revolutionary thing, Tinder has transformed how people make connections and amped up the community aspect to selecting.

Tinder also writes, “the people who know you best have traditionally had a high rate of success when helping you pick a partner.” There is some truth to this, depending on the definition of success. A 2016 paper titled “Love, Money, and Parental Goods: Does Parental Matchmaking Matter?” in the Journal of Comparative Economics found that in Chinese couples, parental matchmaking “is associated with having a more submissive wife, a greater number of children, a higher likelihood of having any male children, and a stronger belief of the husband in providing old age support to his parents.” But at the same time, the researchers found there’s less marital harmony between the couple and lower market income of the wife.

If anything, Tinder’s launch on Apple TV is just a big publicity stunt gearing up for the holidays with family. To stay fresh, Tinder has introduced new features like adding a Spotify track to profiles for personalization and more gender options. Plenty of people definitely still use Tinder, but there’s also a general consensus that there’s a rising dating app fatigue.

Really embracing the aspect of participation aspect of Tinder shows that the company is in on the cultural phenomenon and want to take advantage of that — because honestly, it’s unlikely anyone actually wants their drunk brother to be assessing the dating aptitude of fuckbois in the vicinity. But at the same time, it’ll be a pretty funny wedding story to say that the groom was brought up on the living room’s television and Aunt Peggy just knew he was the one to swipe right on.