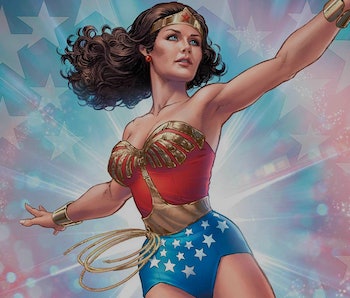 Wonder Woman is no longer an honorary ambassador for the United Nations, less than two months after her appointment sparked protests and a petition with 45,000 signatures.

Diana Prince was named an Honorary Ambassador for the Empowerment of Women and Girls in October, as part of the United Nations campaign to achieve gender equality and empower women and girls by 2030. She was set to be part of an international campaign through at least 2017, but a United Nations spokesman said her role at the organization would end on Friday. He didn’t confirm that the protests caused the United Nations to remove Wonder Woman from its roster, but there’s no doubt it played a part.

Several women and groups, including employees at the United Nations, protested Wonder Woman’s inclusion as an honorary ambassador, largely because of her “overly sexualized image.” While it’s understandable that some would be skittish about using a scantily clad woman as a symbol of female empowerment, it does ignore the many times she hasn’t been exploited—including when she served as a UN ambassador in the comics.

Beyond the image problem, there was also the concern about picking a fictional character instead of a real woman to fight for gender equality, which is a very fair observation. Even feminist icon Gloria Steinem agreed, adding that U.N. Women didn’t see a budget increase when Wonder Woman got her title, so it felt more like an inconsequential show than actual dedication to international female equality.

“The United Nations was unable to find a real life woman that would be able to champion the rights of all women on the issue of gender equality and the fight for their empowerment,” the petition read.

DC Comics spokeswoman Courtney Simmons acknowledged that Wonder Woman’s U.N. title was being revoked, and said Diana Prince will continue to stand for “peace, justice and equality” long after her tenure is over. Simmons also said the release of a special-edition Wonder Woman comic, first announced in October, is still in development. The comic will focus on the empowerment of women and girls. The Wonder Woman solo film, starring Gal Gadot, comes out June 2017.