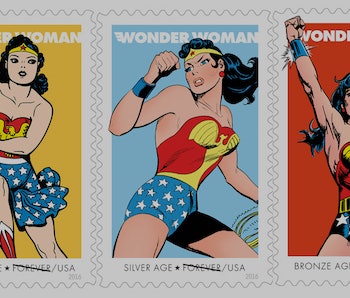 The most iconic female superhero of all time turns 75 this year. To celebrate, the U.S. Postal Service teamed up with DC Comics and Warner Bros. Consumer Products to honor Wonder Woman with a set of badass postal stamps.

Tiffany Smith regaled the crowd with stories of how she fell in love with Diana Prince’s alter ego at a young age after watching her mother dress up as the Amazonian princess for Halloween. “Today is a really special day not just for DC, but for Wonder Woman, because she’s getting her very own Forever Stamp from the United States Postal Service in honor of her 75th anniversary,” Smith explained.

Seaver added that Wonder Woman creator William Moulton Marston was ahead of his time, foreseeing the future growth of power of women.

When Wonder Woman debuted in 1941, America was a very different place, especially for women. “She gave girls the wherewithal to take flight and dream as big as anyone,” Seaver said. “Wonder Woman confidently brushed aside any notion of gender barrier her power was in her fierce independence.”

Wonder Woman is a star not just among comic book heroes but really across the whole spectrum of popular culture, beloved by fans (in particular women and girls) from all walks of life. What better way to share her legacy with future generations than with a set of commemorative stamps?