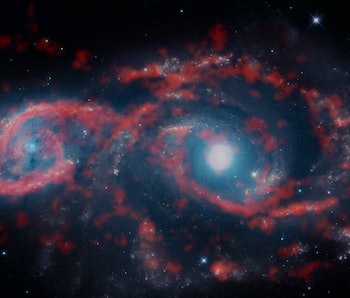 There are only so many common shapes we see out in the cosmos: spirals, columns, and plenty of blobs. But NASA and the European Space Agency stumbled on a rarity earlier this year. Two galaxies, 114 million light-years away, are brushing past each other and forming a pair of galactic eyelids.

A galactic eyelid sounds weird as hell, but all it’s really referring to is a wave of gas that sweeps toward the center of a galaxy, creating an eyelid-like shape. This particular space eye was captured by the Hubble Space Telescope and the Atacama Large Millimeter/submillimeter Array (ALMA) in Chile.

Galactic eyes aren’t the rarest things in the universe, but they only tend to last for a few tens of millions of years so we were lucky to get a glimpse at all. (For reference, the oldest parts of the Milky Way are about 13 billion years old.)

The galaxies aren’t in a head-on collision, but their spiral arms are scraping past each other as IC 2163, on the left, moves behind NGC 2207. As their arms get tangled up, waves of gas and stars move toward IC 2163’s center, forming a pair of “eyelids” made up of gas, dust, and newly forming stars.

The image is actually a composite of two images, one from Hubble and one from ALMA. The Hubble image adds the blue areas, which are just the galaxies’ basic structures. The pink areas, from ALMA, are waves of carbon monoxide gas that are created by the collision and a sign of star formation.

This won’t be the last of IC 2163 and NGC 2207’s interactions. Astronomers think this minor collision is just the beginning of the galaxies merging, so they’ll be keeping an eye on these two.

More like this
Science
8.10.2022 7:15 PM
Beware! Dramatic image of spiral galaxies previews the future fate of the Milky Way
By Kiona Smith
Science
4 hours ago
Do aliens exist? Jupiter’s moon Europa could hold the answer
By LAURENCE TOGNETTI and Universe Today
Science
8.13.2022 10:00 AM
How the Webb Telescope could unveil the newborn universe
By CAROLYN COLLINS PETERSEN and Universe Today
Related Tags
Share: