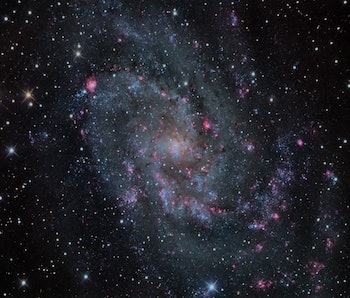 Taking good photos of the night sky requires some skill, some special equipment, and a lot of patience. But if you’re really dedicated, you can produce some amazing images of faraway galaxies from your own backyard.

Arizona photographer Chris Schur did just that and ended up with a stunning photo of the Triangulum Galaxy, about three million light-years away.

The Triangulum Galaxy, also known as Messier 33, is a member of the Local Group galaxies, which includes our own Milky Way and about 40 other galaxies. Like the Milky Way, the Triangulum galaxy is spiral-shaped, but it lacks the center bulge of stars and is a lot smaller.

While the Triangulum is visible to the naked eye (but only under optimal conditions), its shape can’t really be distinguished without a telescope. Schur used a special telescope and camera setup to photograph the galaxy, complete with a water cooled camera and guiding system. The guiding system moved the camera and telescope to account for the Earth’s rotation during the combined 2.5 hours Schur needed for a complete exposure on two separate nights.

Schur’s location definitely helps. He shoots from Payson, Arizona, northeast of Phoenix, at an elevation of 5,150 feet. That means there isn’t a lot of light pollution, and there’s less atmosphere in the way that could distort the image. 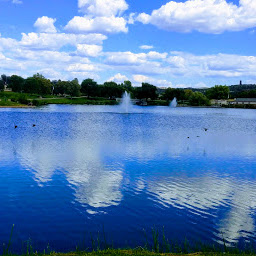 The image didn’t come straight out of the camera looking like a pink, starry galaxy. First, he had to combine two images, then filter out certain colors to get the appropriate color for the galaxy. He ran it through three different image processing programs, including Photoshop CS2 (which was released in 2005). While you might need special equipment for astrophotography, not all the software needs to be the latest and greatest.