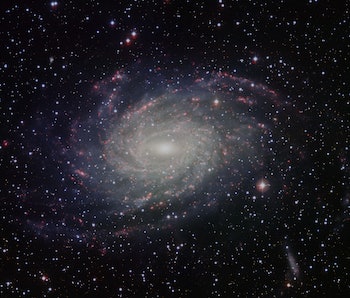 The arm of the Milky Way where our sun sits is much longer than previously thought, astronomers have just learned. Our galaxy has a more complicated structure than many other known spiral galaxies, which often have clearly defined arms with a beautiful sort of symmetry.

But the Milky Way dares to be different. Results of a new mapping effort conducted by an international research team were finally published Wednesday in Science Advances, and they paint a peculiar portrait of our galactic neck of the woods.

It’s a strange fact that we know much more about the shape of distant galaxies than we do of our own, but it actually makes sense; we can’t exactly just snap a picture of an object more than 100,000 light years across while we sit in the middle of it.

“The fundamental problem for the Milky Way is that it’s a disk-like system and we’re inside the disk,” Mark Reid, study co-author and an astronomer at the Harvard-Smithsonian Center for Astrophysics, tells the Christian Science Monitor. “Let’s say you have a disk, and you paint a spiral pattern on the top of it. When you turn the disk sideways and look at it, you can’t see that spiral pattern.”

Still, that technical challenge hasn’t kept astronomers from doing their best to map it out, as if we could look at it from above. The scientists in this case used very-long-baseline interferometry to collect and measure cosmic radio waves from our galaxy and pinpoint regions of massive star formation.

They learned that the sun’s arm of the galaxy — called the Local Arm or Orion Spur — is 20,000 light years long, and as significant in length as many of the other major arms. That’s much longer than previous research had suggested. The astronomers also identified a new spur that branches out between our arm and the neighboring Sagittarius Arm.

It seems the Milky Way, like life on Earth, is governed by both order and chaos.