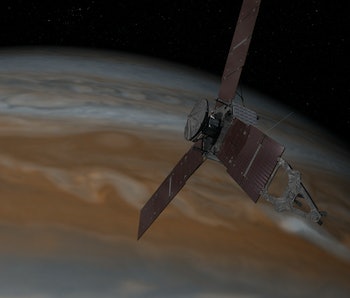 NASA’s Juno spacecraft, has been locked in orbit around Jupiter for five months now. On Sunday at 12:04 p.m. Eastern, the solar-powered probe is set to make its third science orbit, and closest flyby yet of the gas giant.

Each pass is known as a PeriJove, and at the time of closest approach, Juno will skirt 2,580 miles — or roughly the distance from Boston to Los Angeles — above the gas giant’s thick clouds. Racing overhead at speeds of about 129,000 mph (relative to the planet), seven of Juno’s eight science instruments will be energized and busy collecting as much data as possible.

Juno builds on the success of NASA’s Galileo mission, and promises to uncover some of Jupiter’s biggest mysteries. Following a five-year trek through the inner solar system, people around the world cheered as the robotic space explorer successfully inserted itself into orbit around the solar system’s largest resident.

We’re now 150 days into the mission, and Juno is about to embark on its third science-collecting orbit, which puts it a bit behind schedule. By this point in the mission, Juno should have completed six or seven close flybys of Jupiter while in the smaller orbit. However, an issue with the spacecraft prevented it from entering into its planned science orbit.

The planned maneuver was scheduled to take place during the October 19 flyby, and involved shrinking the spacecraft’s orbit from the current 53.4-day orbit to just 14 days. However, before the period reduction maneuver (or PRM) could be conducted, the team noticed an issue with the craft’s helium pressure valves, and delayed the switch.

The spacecraft team expected to make the transition to a 14-day orbit with the December 11 pass. However, that’s not the case. The team has decided to forgo the maneuver in order to further analyze the valves’ performance. It may sound like a major setback, but the spacecraft is healthy and is still able to collect incredible science data in its current orbit.

“We have a healthy spacecraft that is performing its mission admirably,” Rick Nybakken, project manager for Juno from NASA’s Jet Propulsion Laboratory in Pasadena, California said in a news release. “What we do not want to do is add any unnecessary risk, so we are moving forward carefully.”

During Sunday’s flyby, the suite of onboard instruments will collect a wealth of data including an in-depth analysis of the planet’s innards via its gravity field.

“This will be the first time we are planning to operate the full Juno capability to investigate Jupiter’s interior structure via its gravity field,” Scott Bolton, principal investigator of Juno from the Southwest Research Institute in San Antonio, explained in the release. “We are looking forward to what Jupiter’s gravity may reveal about the gas giant’s past and its future.”

Mission managers have decided not to keep the Jovian Infrared Auroral Mapper (JIRAM) instrument off during the December flyby, as the team needs to update the instrument’s software. JIRAM will be up and running in time for the next perijove pass, dubbed PJ4, which is slated for February 2, 2017.