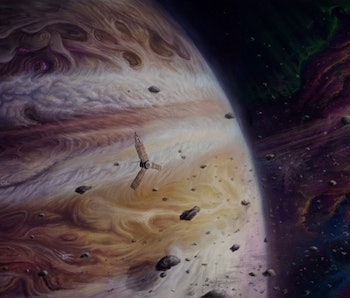 NASA’s Juno spacecraft has been in orbit around Jupiter since July 4, collecting data while combating heavy radiation created by Jupiter’s intense magnetic fields. For the next 20 months, the soccer-field-sized spacecraft will collect data on the planet’s atmosphere, magnetosphere, aurora, chemical compositions, and so on. It’s a massive mission and one that isn’t just about Jupiter. The gas giant is really serving as a proxy for the solar system itself. Scientists want to understand how that whole thing got started.

“It’s not really archeology, in the sense that archeology is all about unearthing the remains of past human cultures and civilizations,” says Jonathan Lunine, a planetary researcher at Cornell University whose investigations are heavily connected to the Juno mission. “But it is archeology, in the sense that we are trying to unearth from a record, which by its nature is imperfect, the earliest part of the history of the solar system.” Jupiter is essential to that: It’s so big that it swept up all this material and essentially stored it.

The largest planet in the solar system, Jupiter was born first and grew rapidly, attracting all the elemental materials and compounds that make up the rest of the celestial objects in orbit around our sun. Studying it to learn about the broader system is not unlike studying the rings of a tree to learn about climate fluctuations.

“Together, Jupiter and Saturn had a primary effect on the dynamics of the disk from which Earth and other planets formed,” says Lunine. Specifically, he says scientists can learn about how Jupiter formed and how it may have affected the evolution of its neighbors by figuring out two things:

1) Does the planet have a rocky core? The presence of a core will tell us whether Jupiter formed by a two step process of core growth followed by the collapse of gas, which would indicate a prolonged formation time that coincided with the birth and growth of other terrestrial planets.

If we find that Jupiter doesn’t have a core — and especially if we one day find out Saturn doesn’t either — “then that would push us in the direction of a much more rapid model,” says Lunine. That would indicate that a planetary disc collapsed and became two planets rather than forming around an original sphere. That process could have occurred much earlier.

“This,” says Lunine, “is kind of the cosmic archeology part.”

Like a city being built from material endemic to a region, Jupiter must have been built by materials available in its galactic neighborhood. Cities fall apart and it’s certain that Jupiter’s constituent materials have chemically transformed over time, but the parts are still the parts — and that’s true when it comes to oxygen and water as well.

Investigating water on Jupiter is really an effort to study oxygen how oxygen accumulated on our planet. If we can come by that information, we might even be able to understan planet, and understand how oxygen accumulates in planets. Knowing this behavior is a sort of reverse way to finding out how a planet develops the potential to collect water.

Lunine’s work revolves around these two investigations. To study the presence of a core, he’ll be closely following the data Juno gathers with regards to gravitational behavior emanating from the planet, involving observations related to the Doppler effect. To look at the abundance of water, he and his colleagues will follow information gathered by the spacecraft’s microwave radiometer, and use radio wavelengths to measure water sitting in the planet’s clouds.

The Juno mission itself has really only become possible in today’s version of NASA. It’s a mission that focuses exclusively on Jupiter, as opposed to the way Cassini is studying all sorts of moons orbiting Saturn and New Horizons is moving far beyond Pluto. This is because to study Jupiter, you have to get to an orbit that’s close enough to study the planet while resisting a violent environment that will inevitably kill off any spacecraft. It has to be a very specialized and narrow investigation.

Unlocking the secrets of Jupiter’s origin and the infancy of the solar system will really only start in October, when Juno will undergo another engine burn to finagle its way into an even closer orbit. That’s truly when Lunine’s research can begin. “This is really a tremendous opportunity,” he says.

More like this
Science
6.16.2022 7:15 PM
The answer to the Planet Nine mystery could come sooner than you think
By Darren Orf
Science
6.29.2022 7:45 PM
Webb Telescope will take aim at one of Hubble's most iconic targets
By Georgina Torbet
Science
11 hours ago
Behold! Curiosity discovers Martian rocks contain an essential ingredient of life
By Allison Parshall
Related Tags
Share: