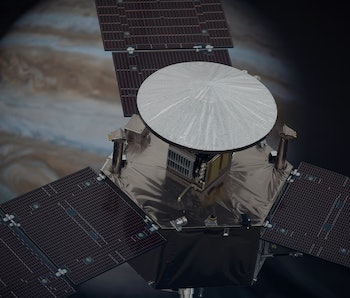 Something’s slightly off about the Juno spacecraft, and NASA has decided to postpone the craft’s final rocket burn — originally slated for October 19 — until it can figure out what’s going on. The new target date for the burn, which will shrink Juno’s orbit around Jupiter from 53.4 days to just 14, is December 11.

The period reduction maneuver, or PRM, was delayed due to a perceived malfunction in Juno’s helium check valves. NASA scientists observed that they were taking several minutes to fully open, a process that should only take a few seconds. That was enough for the team to decide to take things slow, and the burn was subsequently delayed by one orbit.

The transition to a 14-day orbit was meant to facilitate the beginning of more intense data collection for the Juno mission, which is tasked with learning more about Jupiter’s atmosphere and insides, as part of a broader goal to learn more about the origins of the solar system. But that will have to wait while the team figures out what’s going on.

In the meantime, Juno’s instruments can stay on for the duration of this next orbit. They will have to be switched off for the burn, so scientists can continue gathering data as the spacecraft passes close to Jupiter. Juno travels in an elliptical orbit rather than a circular one, meaning certain points along its path are more conducive to studying the planet than others. A tighter orbit means more time logged at the closest points to the surface.

“It is important to note that the orbital period does not affect the quality of the science that takes place during one of Juno’s close flybys of Jupiter,” said Scott Bolton, Principal Investigator of Juno from the Southwest Research Institute in San Antonio, in a NASA statement. “The mission is very flexible that way. The data we collected during our first flyby on August 27th was a revelation.”

Though it’s a bummer that we we’ll have to wait for it, there’s no reason yet to believe that the December 11 test won’t result in similarly exciting data. The Juno spacecraft arrived at Jupiter on July 4, nearly five years after its launch. The 20-month mission will provide NASA scientists with data about the gas giant’s weather, core makeup, water content — all clues in our quest to understand how Jupiter formed. Since we believe the planet to be the oldest in our solar system, understanding how it formed, helps us understand how our galaxy formed.

More like this
Science
6.25.2022 1:30 PM
NASA’s Voyager engineers are devising clever ways to preserve our farthest mission
By Doris Elín Urrutia
Science
17 hours ago
Why Jupiter Is One Of the Webb Telescope's First Targets
By Kiona Smith
Science
6.30.2022 10:45 AM
These 5 objects could be Webb's full-color first images
By Kiona Smith
Related Tags
Share: