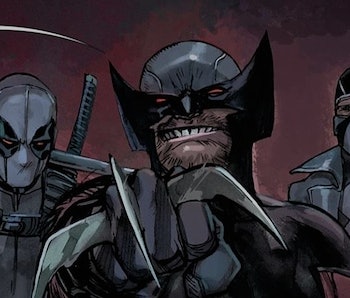 Leave it to Ryan Reynolds to say what comic fans want to hear. In a recent interview, the Deadpool star expressed a desire to work with Wolverine actor Hugh Jackman in a team-up superhero movie he thinks would “light the screen on fire.”

“I want Deapdool and Wolverine in a movie together,” said Reynolds, who added he’d use his “internet friends” to convince Jackman. In next March’s Logan from James Mangold, Jackman will play his iconic Wolverine for the last time on camera since first playing the hero in 2000’s X-Men. But Reynolds thinks he can convince Jackman go berserk for one more round.

“I want to do a Deadpool/Wolverine movie,” says Reynolds, “not just because I think the two would light the screen on fire but I genuinely love the guy.” Reynolds shared screen time with Jackman in 2009’s X-Men Origins: Wolverine as Slade Wilson (which has been glossed over in continuity). While fans love anything Deadpool and Wolverine, the two actors have infectious chemistry; earlier this year, Reynolds spoof interviewed Jackman during the Eddie the Eagle press tour, which accumulated over 3 million views on YouTube.

Reynolds also appears well-versed in comic book knowledge. Deadpool and Wolverine have had a bloody rivalry for decades which was put on pause in Rick Remender and Jerome Opea 2010 run on Marvel’s X-Force. X-Force is rumored to be the source material for the third Deadpool.

With Deadpool 2 not set until 2018, there’s enough time for Jackman to have been away from being Wolverine for him to make a triumphant return, if he so chooses.