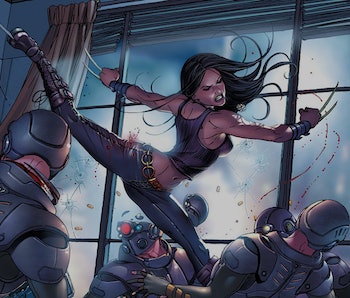 Old Man Logan’s had his ass kicked forward and backward through time — he’s probably getting tired of it. But it seems he’ll finally have someone to back him up in the upcoming Logan in the much needed form of the capably violent Laura Kinney, aka X-23.

Early reports from a press screening for the first 40 minutes (otherwise being called the first “act” of the film) of Logan resulted in a roundup of overall positive reviews. Logan seems to be falling somewhere closer to director James Mangold’s 3:10 to Yuma than any previous superhero extravaganza. But the changes in aesthetic seem to fall flat in comparison to Dafne Keen’s Laura.

In the Marvel comics, X-23, aka Laura, has a “trigger scent” thanks to the dastardly deeds of her torturous creator, Dr. Zander Rice. Rice essentially Schrödinger-d her: The trigger scent is a specific smell that drives Laura into an uncontrollable murderous rage. And she does some serious damage when in those rages. It’s one of the few things that separates her Wolverine from Logan’s Wolverine, she battles with the repercussions of her killing frenzies throughout the series.

Because of the embargo placed on press members after the screening, there’s no telling whether or not this exact issue will crop up in next year’s Logan. But the early reports do confirm one thing: Laura is appropriately violent as can be.

Viewers took to Twitter to share their thoughts on the pre-teen’s homicidal rage. “She is awesome and vicious,” wrote one reviewer.

“Young Laura aka X-23 is also terrific, loads of body count,” tweeted another.

Once Logan hits theaters in March 2017, audiences can look forward to seeing Laura tossing around severed heads and disemboweling grown men with the adamantium claws in her hands and feet. This isn’t necessarily unexpected, though.

Laura is by nature extremely aggressive. In the comics, she was raised in a lab under constant surveillance and without much social interaction, especially not with kids her own age. At the age of seven, her creator, Dr. Rice, experimented on her, using ten times the radiation necessary to bring out her mutation and infusing adamantium to her skeleton without anesthesia. Those actions alone would be enough to drive anyone to violence. Add a trigger scent that adds uncontrollable rage to Logan’s already volatile personality in a hormone-addled pre-teen, and Laura is the ultimate force to be reckoned with.

After her torturous childhood, Laura later lived as a prostitute while she dealt with self-harm, was accused of murder, became fascinated with Wolverine, and generally continued her murderous streak.

So, honestly, this version of X-23 in Logan might be a little dialed down in comparison to her X-Men comic version. It’s probably for the best.

More like this
Entertainment
Feb. 5, 2023
Everything You Need to Know About DCU’s Batman: The Brave and the Bold
By Mónica Marie Zorrilla
Gaming
Feb. 6, 2023
Marvel Snap Data-Mines Reveal a Nimrod-Themed March 2023 Season
By Joseph Yaden
Gaming
Feb. 1, 2023
Surprise Your Opponents With This Overwhelming Marvel Snap Mystique Deck
By Joseph Yaden
LEARN SOMETHING NEW EVERY DAY.
Share: