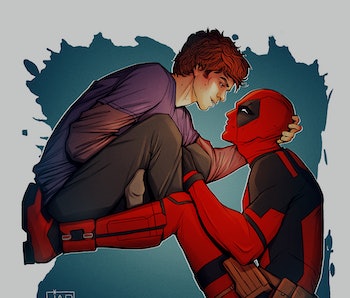 What happens when a fictional superhero pairing begins as a Rule 34 sort of joke, and ends up charming legions of fans? The dedicated fandom that’s dead-set on a romance between Spider-Man (Peter Parker) and Deadpool (Wade Wilson) is about to find out.

When I began investigating the creators who want a #Spideypool romance, I wasn’t convinced it was even plausible, let alone appropriate at all. Now, after having read hundreds of thousands of words into the most popular Spideypool fan-fiction out there, I stand here utterly charmed.

I reasoned during my research that if people were dedicated enough to this pairing to write over 3,200 works of fiction about their relationship on Archive of Our Own, then there had to exist a narrative base that went beyond Ryan Reynolds (Wade Wilson in Deadpool) and Andrew Garfield (Peter Parker in the Amazing Spider-Man films) making out at the 2016 Golden Globes.

Peter Parker’s Spider-Man, the original Spidey and the one most commonly ‘shipped with Deadpool — has been the golden boy of superheroes since he first appeared in Marvel comics in 1962. And while Deadpool and Spider-Man’s relationship in the comics has always been a bit of a contentious roller coaster, Wade Wilson is rarely all-out bad, and Peter Parker tries his hardest to see the good in people. Both are mouthy, sarcastic ramblers. They’re loyal to a fault (on different levels, obviously). They’re intelligent in their own ways. They suffer from a lot of the same insecurities. The base for a relationship is, logically, there.

In Marvel’s comics, the real Spideypool fun began in 2010 in Amazing Spider-Man #611 when Deadpool was hired to distract Spider-Man as part of a job contract. In the comic they fight for a bit and then compete in a “yo mama” joke-off. That comes to an abrupt halt when Deadpool realizes his contract is up. He promises, “when we cross paths in Deadpool Issue #19 I’m gonna Dutch Oven you with your own webs” before disappearing in a blast of energy. And, yes, in Deadpool #19, they cross paths, but, no, Deadpool doesn’t “Dutch Oven” Spidey.

Across contemporary comics, Deadpool is a big fan of Spider-Man. He respects the hell out of Peter Parker (without actually knowing Spidey’s identity), and the two team up in a touching show of friendship in 2014’s Deadpool Annual #2, which is literally titled “Spideypool.”

Deadpool is typically too much for anyone to handle, but Marvel writers have seemed to notice over the years that Spidey has an unusually high tolerance for him. That’s where the shipping friction begins.

Archive of Our Own (AO3) describes itself as an “archive for transformative fanworks,” and much of the #spideypool movement exists in its records.

The Spideypool fic on AO3 with the most “kudos” (think “likes” on a tweet or Instagram post) is a 90,000-word, 43-chapter leviathan by user BeanieBaby, titled “Peter Parker’s Home for the Wayward Villain.” It has over 10,000 unique kudos, and, yes, I read every word of this tome. Basically, the story exists in a world where Peter Parker isn’t Spider-Man (that’s called an “AU” for “alternative universe” or “author’s universe,” depending on who you ask).

In this non-canon universe, Peter was adopted by Tony Stark (Iron Man) as a child and feels left out because he’s constantly surrounded by superheroes. So, he runs away and buys a farm where he ends up kind-of-accidentally adopting Deadpool and the Winter Soldier as “two very homicidal farmhands,” as well as Magneto, Loki, Bob (Agent of HYDRA), Ultron, Venom, and several other mutants who belong in the world of the X-Men.

“Peter Parker’s Home” is a pretty ridiculous read. Although it’s prose fiction, it exhibits the fantastical tone so often associated with Deadpool comics, as well as Peter’s characteristic snark. Peter and Wade’s shared sense of humor and their insecurities are what seems to pair them so perfectly in the minds of so many fanfic writers.

“Really? Even after all that? I knew you found me irresistible, kid.” [Wade] purrs smugly. Peter glares at him and jabs a finger into Wade’s solid chest. “Don’t push it. I won’t tell, but from now on, if you so much as think about doing anything bad, I will end you, Wilson. Don’t think I won’t.” Peter promises vehemently. Wade’s reaction is to tip the boy’s head back, slap a hand over his eyes and before Peter can protest the sudden darkness, slots their mouths together.

In another #Spideypool story, AO3 user darkavengerz starts out with Peter being saddled by the other Avengers with the task of Merc-sitting Deadpool:

Deadpool’s face falls, and it’s kinda like kicking a puppy, or maybe more accurately a mange-ridden, fleabag mongrel, the kinda dog you know if you took home would piss on the carpet, bite the mail-man and unapologetically hump every visitor’s leg.

But the two soon grow to have a deep understanding of one another after finding common ground.

Deadpool shifts a little under Peter’s scrutiny as the pause stretches out awkwardly, and begins talking again, babbling and gesticulating wildly. Peter tunes him out. The more time he spends with Wade, the more he realises how much of him is an act, or no, not an act — an exaggeration. In as much as he likes to grab attention, he’s remarkably good at deflecting it, at stopping people from looking too closely. Peter can recognise that; after all, it’s what he does too.

The five-part Spideypool series by user isaDanCurtisproduction, “Petey and Wade and other being punched in the face things,” which comes in at just over 146,000 words, focuses on the story of Peter and Wade’s romantic relationship after Deadpool tracks down Peter Parker to get advice on how to be a hero. Deadpool wants to impress Spider-Man, but he actually ends up falling in love with Peter Parker. The story also includes the Avengers after Peter becomes a tech intern for Tony Stark. It’s all very heartwarming and flirty.

“Well don’t doubt it, jailbait,” Deadpool said and he took another bite… Peter sighed. “I’m pretty sure I’ve told you multiple times that I’m not jailbait. I’m an adult. Which might explain why I have a job.” He gestured to his camera where it hung around his neck.

In that “jailbait” comment, user isaDanCurtisproduction identifies the most controversial issue in the #Spideypool fandom. When Disney bought the rights to Peter Parker’s visage, the company changed its version of the character into a teenager. Peter, played in the MCU by Tom Holland. That’s a problem for those who want to see him romantically involved with Deadpool, especially since so many #Spideypool shippers take their inspiration straight from superhero movies rather than comics.

Luckily, most Spideypool fans seem to understand the illegality of Deadpool having a relationship with an underage Spider-Man. Peter Parker is most commonly at least 18 in fic (in the most popular ones, that is), putting many minds in the fandom at ease.

That’s not to say that Peter and Wade are mature in any way. Actually, their most common ground in the minds of so many fans seems to be that they are incredibly immature, deriving joy from idiotic jokes and awkward, babbling declarations of love. And that is, perhaps, the most satisfying thing of all: Ships like #Spideypool are built on hope. According to fans of their union, an idealistic nerd with a camera and a scarred chatterbox pervert can find love, and that’s as beautiful as it is strange.