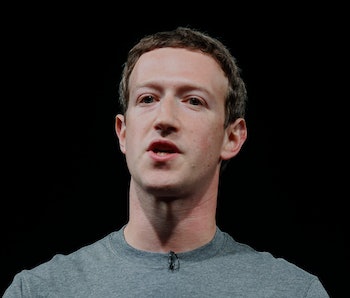 Mark Zuckerberg may have been considering a run for president, a report on Thursday revealed. The Facebook CEO proposed creating a new class of stock that would have allowed him a number of concessions, one of which would be that Zuckerberg could serve two years in government without fear of having to give up company control.

Zuckerberg has found himself in hot water after it emerged that board member Marc Andreessen, who is meant to represent the board’s interest, had been texting the CEO and feeding him advice on how to approach sticky situations. Andreessen coached Zuckerberg on how to deal with the public office concession, stating that he needed to work out “how to define the gov’t service thing without freaking out shareholders that you are losing commitment.”

The report does not specify that Zuckerberg wanted the presidency, but it wouldn’t be the first time the prospect has arisen. Jim VandeHei asked in an op-ed in April why Zuckerberg couldn’t head up a third-party candidacy. The idea came up again in October, when Zara Stone suggested the CEO could run in 2024.

It’s not an unthinkable prospect. Back in October, Wikileaks revealed that Hillary Clinton’s VP list included Apple CEO Tim Cook and Microsoft co-founder Bill Gates as potential picks for vice president. Admittedly, it’s a role with little power in practice, and it’s unclear how close Clinton came to picking either of them. But neither had ever held public office, both having made their names in technology.

A CEO as president isn’t outside of the realm of reason. Trump was elected with neither political nor military experience, and in 1992, businessman Ross Perot grabbed nearly 20 percent of the vote, the strongest result for a third party presidential candidate in 80 years.

Zuckerberg would likely face an uphill struggle against a public that doesn’t trust his company. A 2014 poll by the Libertarian Reason magazine found that only five percent of Americans think Facebook will protect their data from institutions like the NSA, and a 2016 Associated Press poll found that only 12 percent trust the news and information they see on the site. In a 2016 Pew poll, just three percent of respondents say they trust Facebook “a lot.” They’re not personal ratings against Zuckerberg, but his company is seen as extraordinarily untrustworthy.

It may be unlikely, but the fact Zuckerberg was pushing for the concession suggests he may have big ideas in mind. And if there’s anyone who has a strong understanding of the new emerging system of media, it’s going to be the Facebook CEO. Don’t count out a turnaround just yet.