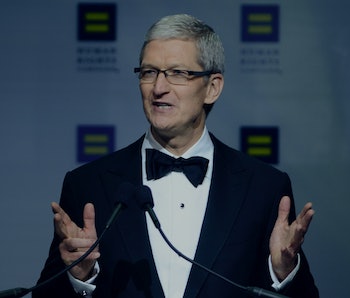 Hillary Clinton campaign chair Jon Podesta’s leaked emails are the latest Wikileaks gift that keeps on giving, and today’s present is the news that the former Secretary of State almost considered Apple CEO Tim Cook for a running mate.

Cook would have been an interesting choice considering his lack of political experience — being picked, and the mere fact that he was a possibility, speaks to how the Clinton campaign was possibly appealing to voters. It also looks like Cook wasn’t the only influential tech mogul on the long list for possible VP candidates.

On March 17, Podesta emailed Clinton, outlining the “first cut of people to consider for VP” and organized them into “rough food groups.” Those groups appear to be Latinos, women, white dudes, black dudes, ex-military, businesspeople, and Bernie Sanders. The businesspeople category had the most names, including Bill Gates, Melinda Gates, Michael Bloomberg, and of course Cook. The Bernie Sanders group had the fewest names.

Discussing household names like the Gates and Cook was likely Clinton’s people trying mirror Donald Trump’s “successful businessman” platform. It’s understandable that the Clinton campaign wanted to show off a vice presidential candidate that has a proven track record of building and sustaining a notable company. Brands like Microsoft, Bloomberg, and especially Apple touch people’s everyday lives — the latest iPhone info becomes a buzzworthy topic and people will wait in ridiculous lines to get their hands on the newest Apple products. Cook has proved to be capable of running a colossal corporation and being a leader in technology, attributes that make him engaging for a role serving under an experienced politician like Clinton.

Furthermore, Cook would have added another type of diversity to Clinton’s campaign since he’s openly gay. Podesta’s “food groups” make obvious that they were also taking into consideration certain candidates based on what minority groups they could appeal to. Clinton has been vocal about her support of LGBT rights and equality, and while Cook might not have been on the list explicitly because of his sexuality, it still would have affected public opinion. However, it also could have worked against her if she was trying to hook Republican voters. According to the Pew Research Center, GOP support of same-sex marriage might be on the rise since 2001, but still only 33 percent are in favor.

Adding Cook to the ticket might have also led to criticism on the duo’s approach to foreign policy. Throughout the presidential race, Clinton has been under scrutiny for Libya’s instability. And one of the major examinations when it comes to Apple (other than the introduction of AirPods) is the company’s treatment of workers in their factories abroad.

Clinton ultimately went with attorney-turned-Senator Tim Kaine, a decision that other emails seem to show was the pick all along. But assessing other possible candidates is important for trying to understand where a presidential hopeful like Clinton is coming from and all the moves she’s thinking of during her race for the White House.

More like this
Innovation
Jan. 28, 2023
The 5 best mini projectors for iPhones
By Debbie Lee
Entertainment
4 hours ago
Sharper is a Sleek and Seductive Thriller That Keeps You Guessing
By Lex Briscuso
Gear
Jan. 30, 2023
A Foldable iPad Is Proof That Apple Has Outgrown Its Wait-and-See Mentality
By Ian Carlos Campbell
LEARN SOMETHING NEW EVERY DAY.
Related Tags
Share: