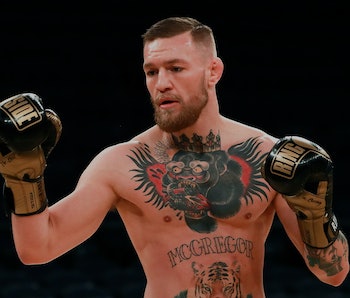 Euron Greyjoy loves talking about his big cock. Season 6 of Game of Thrones gave him an entire soliloquy about it. But in Season 7, he’ll have an unlikely friend to continue discussing dicks with: real-world UFC double-champion Conor McGregor.

Previously, McGregor was said to have a role on Game of Thrones, but its exact nature was unclear. We guessed that he’d get an anonymous off-book warrior role because he’s got to fight, naturally. Although he might still fight, forget warrior — according to Watchers on The Wall, McGregor will be a pirate on Euron Greyjoy’s crew. It’s pretty perfect, since McGregor is the closest thing the real world has to Ironborn.

Season 6 introduced Euron Greyjoy with a bang, as he appeared dramatically on a bridge on a dark and stormy night and proceeded to murder his brother. His screen time trickled out before the season’s watch ended, but he’s still out there wanting to marry Daenerys, kill his niece and nephew Theon and Yara to assert his rule over the Iron Islands, and presumably continue waxing poetic about his dick.

Season 7 will likely see him as a dark-horse adversary, who attacks when all eyes are on Cersei as the villain. Especially since we know he will be present for the big set piece that will unite an unprecedented seventeen major characters, its safe to say that Euron Greyjoy’s time on the show is not dead, and in fact, may never die.

With Conor McGregor as one of his pirates, the prospect of Euron Greyjoy as a legitimate contender to the throne could be that unexpected final twist George R. R. martin has talked up. Or perhaps he’s secretly the mysterious Howland Reed in disguise.