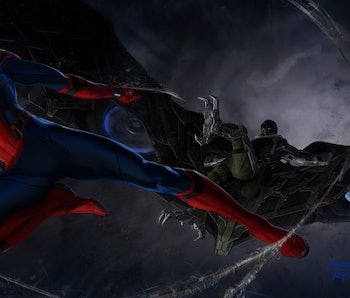 Imagine you’re a teenager again, and Iron Man busts into your life asking for your help. He gives you a bunch of tech, trains you to fight, and you meet every single one of your heroes at once. That’s the crazy experience Peter Parker went through in Captain America: Civil War, and in his solo film Spider-Man: Homecoming, he’ll experience the same downer mood fans go through after a weekend at Comic-Con. Back to reality, man. What a bummer.

Tom Holland describes Homecoming as “a character piece about this kid who’s struggling to talk to girls and also struggling to save the city.” Taking place after Civil War, the film follows Spidey’s return home to his neighborhood in Queens with a new suit — and new gear — while taking on his own villains like the Vulture (played by Michael Keaton).

“He literally just went to Europe with the coolest clique of them all,” says film co-producer Eric Hauserman Carroll in a recent interview. “And now he’s back with the academic decathlon and the mathletes and going, ‘What am I doing here?’”

That hormonal energy will really play a crucial role in the events of the film, too. Unlike previous Spider-Man movies where Spidey learned to be a superhero rather quickly, Homecoming will show the web-head act like a bonehead too. “This is really a movie where Spider-Man’s not the finished article,” says Holland. “He really does learn and he makes massive mistakes. It’s nice to see a kid do that and then try to rectify those mistakes.”

Spider-Man: Homecoming will hit theaters next summer on July 7.