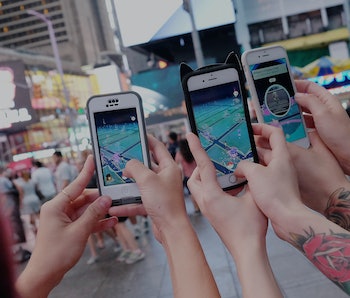 Pokémon Go is set to experience a digital Cambrian explosion. According to a press release from Niantic, the developers of the popular mobile title, and the Pokémon Company International, details on “the addition of more Pokémon to Pokémon Go” will be revealed on December 12. What exactly that looks like is a bit murky, but there’s a few exciting possibilities.

On its own, adding “more Pokémon” is a fairly bland reveal. Of course they’re going to add more. There’s over 700 of the critters in the franchise, split by generation into chunks of 100ish. And it’s distinctly possible that we’re about to hear that Pokémon like Totodile, Sentret, and more are coming to the augmented-reality game sooner rather than later.

But there’s actually still a small handful of first generation pocket monsters that haven’t made an appearance yet. Given the fact that Niantic only recently added Ditto, a Pokémon from the original set of games, to Pokémon Go, and the timing of the reveal, there’s a better than good chance that we’re about to see Legendary Pokémon like Articuno, Moltres, and Zapdos in time for Christmas.

Regardless, there’s definitely going to be a renewed interested in the previously popular game, and Niantic and the Pokémon Company International are doing everything in their power to bump Pokémon Go back to the heights of summer 2016. Reports of a partnership with Starbucks, an upcoming press conference with Sprint that may well be zero rating for the game, and then this December 12 announcement? Both companies are definitely stepping up their game, and we’re closer than ever to seeing the next evolution of Pokémon Go.