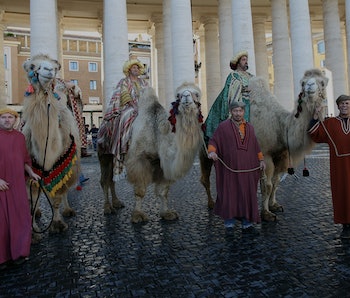 The Gospel of Matthew tells that, not long after Jesus’s birth, three Wise Men appeared to bestow upon him gifts befitting of the Christ. Kings in their own land, the Wise Men got a memo from God that somebody important was about to be born in Bethlehem. They set off at once. Most of us know how the story goes from there: Jesus was born a virgin birth to his mother, Mary, and his father, Joseph, on the day most Americans consider to be Christmas. It’s an old story, one in need of an update.

Evidently, some of the entrepreneurs among us think so, too. Casey Wright, founder of the hilariously apt Modern Nativity Set, seems to have had the same idea. He created a modern interpretation of the nativity scene that appears on fireplace mantles and front lawns throughout the country right around this time of year. It’s complete with a selfie-taking, latte-drinking Joseph and Mary and three mustachioed Wise Men arriving on Segways, dressed like they came straight from a brewpub that only plays the National’s discography on repeat.

In Wright’s creation, the gifts that the Wise Men brought for Jesus are packaged inside boxes bearing the Amazon logo. But we can’t actually see what’s in them, and the scene isn’t quite complete without a reimagination of the symbolic presents brought by the trio. The original offerings were gold, frankincense, and myrrh. Here are some ideas for updated gifts filling the same role as their predecessors, but have a modern flair to them:

The first of the Wise Men gave baby Jesus a gift of gold. In addition to being a sweet (and super bougie) birthday present, the gold symbolized Jesus’s status as the soon-to-be king of the Kingdom of Heaven. But unless you’re one of those people who make the terrible ads telling people to buy gold, possessing the mineral in non-jewelry form is well out of fashion, doubly so for hipsters nowadays, who are probably more likely to own jewelry made from reclaimed PBR cans.

Instead, I like to imagine that those hipster Wise Men would have brought Jesus an all-expenses-paid Amex Centurion Card, the most exclusive credit card in the world. Made from anodized titanium and carrying hefty membership fees, the Centurion Card has virtually no spending limit. Earlier this year it was used to purchase a $36 million porcelain cup. An accessory more befitting the wealth and power of a king there is not.

This might seem like an ironic gift for Jesus, considering his image as a humble, no-frills kind of guy. But wouldn’t that just fit the hipster bill? To have all that wealth, only to go around dressing like a a riverboat captain.

A Bag of Weed

The second of the Wise Men’s gifts was frankincense, an essential oil. Symbolically, it represented the religious role that Jesus would come to play, calling to mind the incense used in religious rituals. Like gold, frankincense is still around today, though not usually in pure, unaltered form. It’s typically used today as a component of incense and perfumes. Back in Jesus’s day it, would have been used for a number of medicinal and ceremonial purposes, many of which essentially amounted to chilling out. Sound familiar?

Given the progress made in 2016 toward marijuana legalization, it seems only fitting that the modern replacement for frankincense be a bag of weed. It would be just the thing to match hipster Jesus’s laid back personality once he grows up and can partake in some of the ganja. It’d also probably bring on some religious experiences in its own, too.

A Bottle of Beard Oil

Myrrh, the third gift, is yet another essential oil. It’s historical uses overlap in many ways with those of frankincense, except one area: It’s used in embalming dead bodies. It’s usefulness here symbolized Jesus’s eventual death and resurrection.

An acceptable and modern update is obviously beard oil. Forget preserving a corpse, it’s all about maintaining that luscious facial hair while still alive. Jesus, consistent with his hermit mythology, is often depicted with some degree of fuzz. And grooming has come a long way since the days of Rome. It would be just the thing to keep Jesus’s beard soft and itch-free as he delivers his Sermon on the Mount. Plus, beards are back in style, just in time for the second (hipster) coming.

More like this
Culture
Sep. 15, 2022
The cults that survive even when the prophecy fails
By Peter Ward
Culture
Sep. 16, 2022
How an ultra-nationalist religious group became one of the most popular film producers in Japan
By Alicia Haddick
Entertainment
Sep. 27, 2022
House of the Dragon Episode 6 is the worst yet — for one specific reason
By Alex Welch
Related Tags
Share: