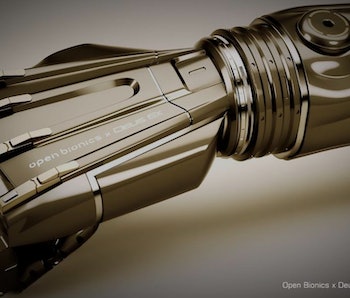 Sorry, biohackers. Open Bionics, which makes awesome themed robot arms for patients, does not want to help healthy humans cut their limbs off. At the TechCrunch Disrupt conference in London on Tuesday, company co-founder Samantha Payne responded to the idea of making enhanced versions of its Deus Ex and Iron Man style limbs for experimenters with a clear “definitely not.”

“It’s an interesting space. I know lots of people who are biohackers, but we are really interested in helping people restore functionality,” Payne said. “People sometimes think the bionic hands are better than human hands, but that’s not the case. Not yet.”

Biohackers are a collective of people interested in adding new senses and abilities through the use of implants and other tools. Neil Harbisson, a proponent of the movement, has implanted a sensor in his brain that can detect colors from around the world, while Grindhouse Wetware has created LED lights that embed under the skin for light-up hands.

Open Bionics has worked with Disney and Eidos to bring well-known brands like Frozen and Star Wars to their 3D-printed limbs, but these designs will stay firmly in the realm of healthcare.

On the healthcare front, Payne revealed that this week, Open Bionics will start working with an initiative of England’s National Health Service (NHS), the world’s largest public healthcare service. The company will sign a developmental contract with the Small Business Research Initiative for Healthcare (SBRI Healthcare), an NHS initiative focused on getting products into the service.

However, when it came to helping healthy people transform into cyborgs, Dan agreed with Payne that it might not be a great idea.

“If I had two hands, I would not choose to cut my own hand off,” Dan said. “It’s a bit worrying.”

More like this
Innovation
6.21.2022 11:00 AM
No, Google’s Deepmind isn’t on the verge of human-like reasoning
By Tristan Greene and Undark
Entertainment
20 hours ago
Westworld Season 4 theory may reveal a shocking Dolores twist
By Mónica Marie Zorrilla
Culture
6.27.2022 1:30 AM
Who is Christina in 'Westworld' Season 4? Evan Rachel Wood explains her "new" character
By Mónica Marie Zorrilla
Related Tags
Share: